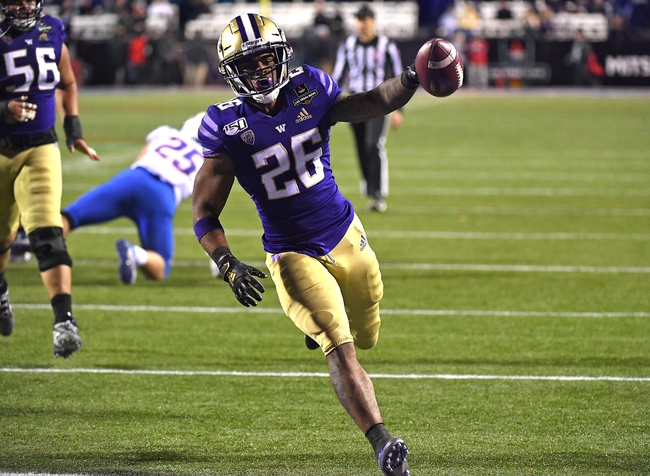 The Washington Huskies 2019 season wasn’t terrible, but heading into the season the expectations were much higher. This is a new season though, and the hope is that they will be competing again for a Pac 12 title. Get free college football picks all season long at Pick Dawgz.

So will the Huskies get over the posted win total of 8.5 wins? Let’s break it down.

Washington finished the 2019 season with a record of 8-5 but this team is going to look a lot different. Gone is quarterback Jacob Eason who went off to the NFL. Coach Chris Peterson also stepped down from his position. The Huskies were in a lot of games last season but a few games they had issues closing out late.

The Huskies promoted defensive coordinator Jimmy Lake to be the new man in charge of the program. Washington also brought in two new coordinators to run the show.

Lake’s biggest question that needs to be answered is who will be the guy under center. Replacing Eason is going to be a hard job, but they hope they have the man to do it. Jacob Sirmon looks to be the frontrunner for the job,but it will be an open competition.

As good as the offense needs to be better, the defense has some big question marks too that need to be figured out. They took a big hurt to their depth from graduation and players going to the draft. With the questions at quarterback, it puts even more pressure on the Washington defense.

Pick: The Washington Huskies start off the season with a tough matchup at home, and it could be make or break to start off the year. Getting the game at home should really help the Huskies chase to win this game, and they will be competing for the Pac 12 title. 11-1 or 10-2 will be the record at the end of the season, and that will be enough to go over the posted total.