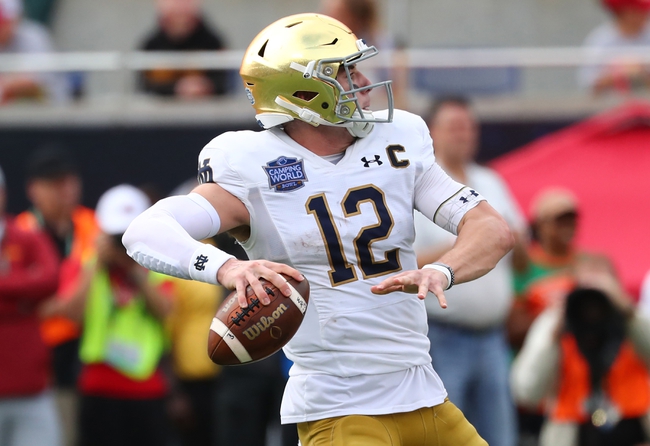 The Notre Dame Fighting Irish were a good team in 2019 but this is a fanbase that is disappointed in anything less than a National Championship. The Fighting Irish are expected to be competitive in the 2020 season, but how good are they going to be? Get free college football picks all season long at Pick Dawgz.

Notre Dame finished the 2019 season with an 11-2 record including a win over Iowa State in their bowl game. The Fighting Irish’s only two losses came against the Georgia Bulldogs and Michigan Wolverines.

Last season Notre Dame was lead by Ian Book who finished the season throwing for 3,034 yards and 34 touchdowns. The Fighting Irish will get Book back this season which is going to be a great help for the offense.

The big issue for Notre Dame is they lost a lot of pass catchers from last season. Gone are Chase Claypool, Chris Finke, and Cole Kmet.who were leaned on heavily. Coming out of the backfield there also seems to be some questions that need to be answered.

Notre Dame’s defense should be good in 2020, but they do need to find a shutdown corner to take the defense to the next level.

Pick: Notre Dame’s win total is set at 9, and that number is too high. The offense has a lot of questions outside of Book, and that is going to hurt them. Notre Dame will get out to a fast start to the season but after Wake Forest on September 26th it’s going to be tough, There are no easy games in the second half of the season, and it wouldn’t be shocking to see them losing three or four games in a row. Notre Dame will win eight games, which will keep them under the total.