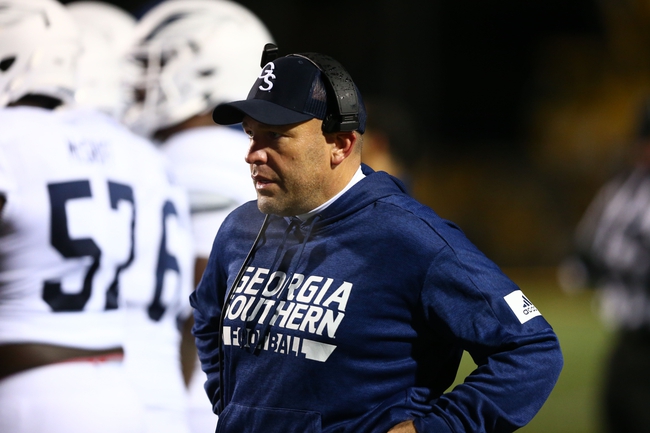 The Georgia Southern Eagles will be eager to get back on the field, after ending the season with a loss to Liberty in the FBC Mortgage Cure Bowl.  Georgia Southern finished the 2019 campaign with an overall record of (7-6), while going (5-3) in Sun Belt play.  The offense averaged 28.2 points per contest, which ranked 70th at the FBS level.  The defense allowed the same amount per game, which also ranked 70th.  The program is under the direction of Chad Lunsford.

The offense was guided by quarterback Shai Werts.  Werts passed for 799 yards, while throwing 9 touchdowns and just 1 interception.  The dual threat quarterback added over 730 yards rushing, while finding the end zone 5 times.  Werts will be a senior during the 2020 season.  Georgia Southern is a run first offense, therefore 6 different players had at least 1 rushing score.  The program totaled 29 rushing touchdowns last season.  Running back Wesley Kennedy III paced the backfield, totaling 824 yards, while crossing the goal line 11 times.  J.D. King added 804 yards rushing and 8 scores.  Both running backs are back for their senior season.  Wideout Malik Murray enters his senior season, after reeling in 20 receptions for 195 yards and 3 scores.

As a team the defense registered 25 sacks, 9 interceptions, and recovered 10 fumbles.  The defense was led by linebacker Rashad Byrd.  Byrd totaled 85 tackles, which was a team high. The linebacker will be entering his senior year.  The pass rush was controlled by Randy Wade Jr. and Dillon Springer.Both are back for the 2020 season, as both collected 4 sacks during the 2019 campaign.  The secondary was paced by safety Kenderick Duncan Jr.  Duncan recorded 8 pass break ups and 2 interceptions. Georgia Southern will need to fill a few holes, as four players in the secondary were either seniors or signed as an undrafted free agent.

Let us take a look at the Georgia Southern schedule for the 2020 season.

The Eagles open the season with a tough road game, as the program hits the road for a matchup with Boise State on the blue turf.  Georgia Southern will then return home to face Campbell and Florida Atlantic.  The last non-conference game is near the end of the season, at Ole Miss.

The projected win total is set at 6.5 wins.  Georgia Southern has a tough non-conference slate and will more than likely go 1-3 in such games.  Georgia Southern will also have to play both Appalachian State and Louisiana.  This is a team that likes to control the clock, as this program is primarily a run first school at this point.  This team returns enough talent to make it back to a bowl game, however the schedule isn’t the easiest.  I’m going to side with the under, as the schedule is quite brutal for the Eagles this season.  There are still winnable games on the schedule, but the amount of tough games on the schedule is essentially equal.  I’m siding with the under 6.5 wins, but still see Georgia Southern getting back to another bowl game, after recording a 6-6 regular season.