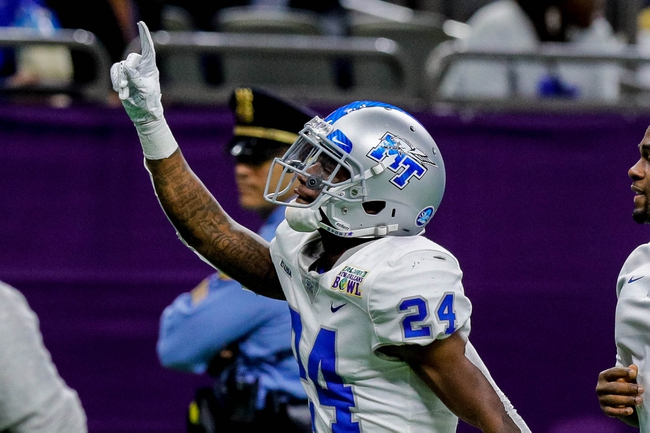 The offense was led by quarterback Asher O’Hara.  O’Hara passed for 2,616 yards, while throwing 20 touchdowns and 8 interceptions as a sophomore.  The soon to be junior is a dual threat quarterback, who also led Middle Tennessee State in rushing, collecting 1,044 yards and 9 scores.  Chaton Mobley returns for a junior season, after recording 3 touchdowns and 203 yards rushing.  Mobley rushed for over 600 yards as a freshman two seasons back.  Wideout Jarrin Pierce had a team high 552 yards receiving.  Pierce registered 42 receptions, while contributing 4 touchdowns.  He will be entering his senior year.  Wideout Jimmy Marshall also returns for a senior season.  Marshall collected 35 receptions for 513 yards, and a team high 6 receiving touchdowns.

As a team the defense registered just 11 sacks and 8 interceptions, but did recover 9 fumbles.  The defense was guided by safety Jovante Moffatt.  Moffatt had a team leading 98 tackles.  The safety signed as a free agent with the Cleveland Browns.  Defensive end Tyshun Render led the defense with 3.5 sacks, but he also signed as a free agent at the conclusion of the 2020 NFL Draft.  The secondary will have the likes of Reed Blankenship during the 2020 campaign.  Blankenship enters his senior year, after totaling 58 tackles, 3 pass break ups, and 2 interceptions.

Let us take a look at the Middle Tennessee State schedule for the 2020 season.

The Blue Raiders open their 2020 season with a matchup against Duke on the road.  Middle Tennessee State will also play host to Indiana State and Virginia Tech during non-conference play.  The last out of conference game is a contest at UConn.

The projected win total sits at 6 wins.  MTSU should have no issue going 2-2 in non-conference play, even though the UConn game is on the road.  Middle Tennessee State did not have a dominant running game outside of dual threat quarterback Asher O’Hara.  The defense ranked 81st last season in points allowed per contest.  The defense saw a few of their key players sign as undrafted free agents.  I’m honestly caught right in the middle with this play, as 7 C-USA teams had a conference record between 5-3 and 3-5.  A few of these games could go either way, but a 6 win season and a chance at a postseason game seems realistic for the 2020 campaign, as Middle Tennessee State returns key players in the passing game.  I’m going to side with the under to be safe, but I see a push happening here.