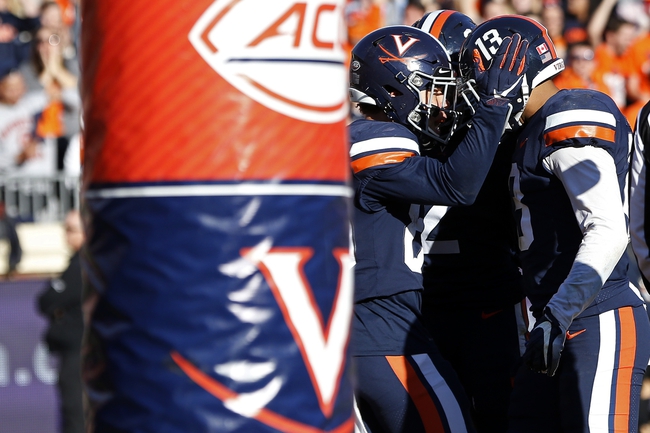 The Virginia Cavaliers will be looking to build off of their 2019 season, but mirror their first place finish in the ACC Coastal division. Virginia finished the 2019 season with an overall record of (9-5), while going (6-2) during ACC play.  The offense averaged 32.1 points per contest, which ranked 40th at the FBS level.  The defense allowed an average of 27.1 points per game.  The program is under the direction of Bronco Mendenhall.

The offense was led by dual threat quarterback Bryce Perkins.  Perkins passed for 3,538 yards, while throwing 22 touchdowns and 12 interceptions.  He also added nearly 800 yards rushing, while finding the end zone an additional 11 times.  However, he was signed by the Rams as an undrafted free agent.  Brennan Armstrong is entering his sophomore season and will be looking to take over the starting role of quarterback. Running back Wayne Taulapapa returns for his junior season, after rushing for 473 yards and 12 scores during the 2019 season.  Virginia will have to overcome the loss of star wideout Hasise Dubois.  Dubois was a senior last season, reeling in 75 receptions for 1,062 yards and 6 scores.  Terrell Jana totaled 886 yards receiving, 74 receptions, and 3 touchdowns.  Jana looks to step into the number 1 receiver role for the 2020 campaign.

As a team the defense collected 46 sacks, while intercepting opposing quarterbacks 12 times.  The defense was guided by linebacker Zane Zandier.  Zandier had a team leading 108 tackles, while also contributing 5 sacks.  The linebacker returns for his senior season.  Virginia had no issue bringing consistent pass rush.  The pass rush was mainly led by linebacker Jordan Mack.  Mack had a team high 7.5 sacks, while also registering 69 tackles. Mack was signed as an undrafted free agent by the Carolina Panthers. Defensive back Nick Grant is back for the secondary, after posting 2 interceptions and 8 pass break ups as a junior.  Safety Joey Blount is also back, after being second on the team in tackles with 95, while also recording 3 pass break ups and 3 interceptions.

Let us take a look at the Virginia schedule for the 2020 season.

The Cavaliers have a tough season opener, as Virginia will take on SEC member Georgia.  Virginia will then see the level of competition drop considerably, as the program plays host to both Virginia Military Institute and UConn.  The last non-conference game on the docket for Virginia is a road contest at Old Dominion.

The projected win total is set at 8.5 wins.  Virginia will more than likely have a 3-1 non-conference record, which would leave the program needing just 6 ACC wins to cover the total.  While Virginia does have to face both Clemson and Louisville, the Cavaliers do have a couple easier road contests.  Virginia will face both Georgia Tech and Duke on the road. The Cavaliers should walk out of those road stadiums with wins.  The program will also face North Carolina, Miami, and Pittsburgh at home.  The program should be able to win these three games, which would put their win total at 8 wins. Virginia will not win at Clemson, so that just leaves two games left.  The Cavaliers play host to Louisville, while hitting the road for a game at in-state rival Virginia Tech.

Virginia has won 2 of the last 3 meetings at home against Louisville, which includes a 27-3 win during the 2018 season.  I’m going to side with Virginia to secure a win here on home turf, while falling on the road at Virginia Tech.  Not knowing what the fan situation will be like for college football season, I still like for Virginia Tech to protect their home turf for an in-state game.  I’m taking the over, as a 9-3 season for Virginia looks like a solid play. This is a program that returns quite a bit of talent on defense and that alone will keep the Cavaliers in games.