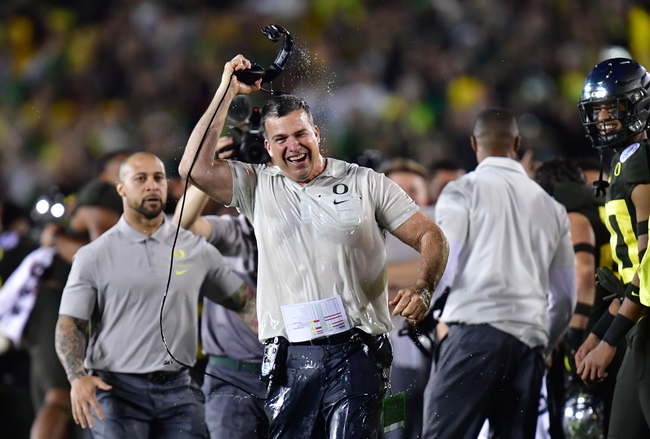 The Oregon Ducks have some question marks coming into the 2020 season, but they are hoping they can build off some big momentum off the 2019 season. Get free college football picks all season long at PickDawgz.

Let’s take a closer look at the Oregon Ducks heading into the 2020 season, and what type of season they might have.

The Oregon Ducks were led in 2019 by Justin Herbert who is now a member of the Los Angeles Chargers. The Ducks finished the 2019 season with a Rose Bowl victory. After starting off the season with a heartbreaking loss to Auburn, Oregon quickly regained form, and sent out Herbert and the rest of the seasons on a high note.

Oregon is still led by coach Mario Cristobal who is entering his third season in charge. The biggest question he has heading into the season is how will they will Herbert. All signs are pointing towards Tyler Shough, who was the backup last year to take over the job. There is also a chance that someone like Jay Butterfield who was a four-star recruit could be under center for the season opener.

The Ducks have the top recruiting class in the Pac 12, and there should be plenty of guys who can come in right away and start early.

Pick: Looking at Oregon’s schedule, there is no doubt this is going to be tough. Starting off the season with North Dakota State, an FCS level powerhouse is no joke. Next, Ohio State will be coming to town in one of the best games in the early college football schedule. If they start off the season 2-0 there could be talk of National Championship contention. Unfortunately for the Ducks, Ohio State is going to prove to be too much for them.

That will be the only loss of the season though, which means the Ducks will finish over the posted 9.5 wins.