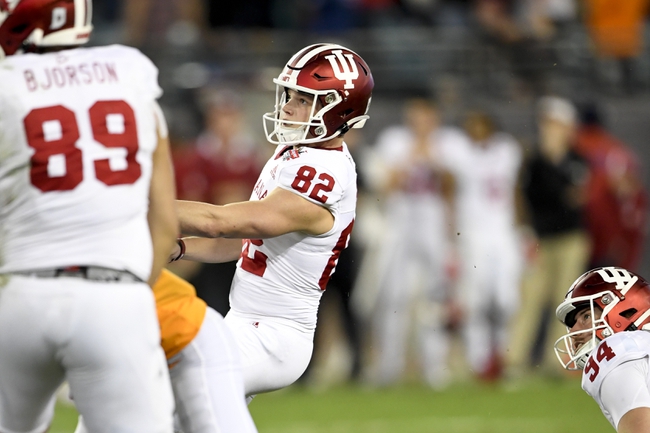 The Indiana Hoosiers will be looking to build off of a 2019 season that saw the program participate in the Taxslayer Gator Bowl.  Indiana fell to Tennessee 23-22 in that game.  Indiana finished the 2019 campaign with an overall record of (8-5), while going (5-4) during Big Ten play.  The offense averaged 31.8 points per contest, which ranked 43rd at the FBS level.  The defense allowed an average of 24.4 per game.  The defense ranked in the top 50 in fewest points allowed per contest.  The program is under the direction of Tom Allen.

The offense was led by quarterback Peyton Ramsey.  Ramsey passed for 2,454 yards, while throwing 13 touchdowns and 5 interceptions.  The quarterback added 7 rushing touchdowns.  He will be entering his senior season.  Running back Stevie Scott III rushed for nearly 850 yards, while finding the end zone 10 times.  He is back for his junior season.  Wideout Whop Philyor enters his senior year, after reeling in 70 receptions for 1,002 yards and 5 scores. Tight End Peyton Hendershot returns for his junior season, after hauling in 52 receptions for 622 yards.

As a team the defense recorded 27 sacks and forced 17 turnovers.  The defense was guided by linebacker Micah McFadden.  McFadden had a team leading 60 tackles, while also adding 1.5 sacks.  The linebacker will be looking to build off of that for his junior year.  Defensive lineman Jerome Johnson returns for a senior campaign, after finishing the 2019 season with 5 sacks. The secondary should be paced by Tiawan Mullen.  Mullen registered 13 pass break ups as a freshman.

Let us take a look at the Indiana schedule for the 2020 season.

The Hoosiers will look to get the season started off with a bang with a road conference game at Wisconsin.  The non-conference slate features Western Kentucky, Ball State, and UConn.

The projected win total sits at 7 wins.  Indiana should not lose a non-conference game, as there is no scenario that makes sense for Indiana to fall during non-conference play.  After falling to Wisconsin, Indiana will reel off three straight wins, before playing host to Maryland.  Conference play really pays into the Hoosiers favor, especially seeing the home and road competitions differences.

An area of note is Indiana will have Stanford grad Jovan Swann for the 2020 season.  Swann collected 10 sacks the last 3 seasons.  I’m going to side with the over here, as Indiana should see 6 straight wins, after a loss to Wisconsin.  Indiana will lose to both Penn State and Ohio State, before the schedule starts to ease up. The Hoosiers would need just 1 win to push this total, with home games against Illinois and Purdue.  I think Indiana should have a great chance to win both of these, as the offense returns a surplus of talent.  The over looks like the right play, as Indiana has an above average chance to go 8-4 during the regular season.