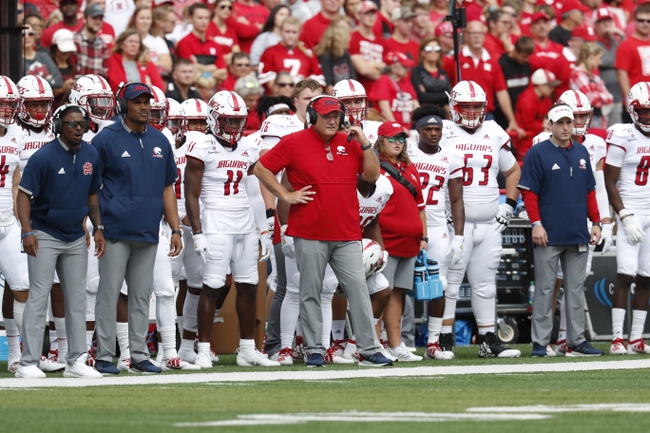 The South Alabama Jaguars will be hoping for better results during the 2020 season.  South Alabama finished the 2019 campaign with an overall record of (2-10), while going (1-7) in Sun Belt play.  The offense struggled to score, averaging 18.4 points per contest, which anked 122nd out of 130 FBS programs. The defense gave up an average of 30.7 per game.  The program is under the direction of Steve Campbell.

The offense saw three different quarterbacks attempt at least 24 passes.  Desmond Trotter had the most success out of the three quarterbacks, passing for 820 yards, while throwing 8 touchdowns and just 2 interceptions.  The program will have to overcome the loss of running back Tra Minter.  Minter rushed for 1,057 yards and 5 touchdowns.  Carlos Davis looks to take over for Minter, after rushing for over 260 yards and 2 scores as a freshman. Kawaan Baker hauled in 35 receptions for 574 yards and 3 scores as a junior.  Baker is back for his senior campaign.  Jalen Tolbert recorded 521 yards receiving and 6 scores, as he is also back for the 2020 season.

As a team the defense registered 17 sacks and 9 interceptions, while recovering 7 fumbles.  The defense was led by linebacker Nick Mobley.  Mobley registered a team leading 91 tackles, while also adding 1 sack during his sophomore season.  The linebacker returns for his junior season. The defense will be without their two players that brought consistent pass rush last season.  Jeffery Whatley and Rocel McWilliams both had 4.5 sacks.  Whatley signed as an undrafted free agent with the Cleveland Browns, while McWilliams is out of eligibility. Defensive back Travis Reed paced the secondary with 10 pass break ups and 3 interceptions.  However, he follows the same trend here, as he also will not be back.  Reed signed as an undrafted free agent with the Indianapolis Colts.  Keith Gallmon does return for South Alabama on defense, he collected 59 tackles, 4 pass break ups, and 1 interception a season ago.

Let us take a look at the South Alabama schedule for the 2020 season.

The Jaguars open the season against Southern Mississippi on the road, before playing host to Grambling State.  The rest of the out of conference schedule is a road game at Florida and a home contest against UAB.

The projected win total sits at 3.5 wins.  In order for South Alabama to cover this win total, the program would have to increase their win total by 2 wins from the 2019 campaign.  There really isn’t much hope that South Alabama will finish better than 1-3 during non-conference play.  The Jaguars should see back to back wins against Texas State and UL Monroe.  Those two wins plus a win against Grambling State would give South Alabama 3 wins.

This is a program that returns a quarterback that saw plenty of time last season, while also bringing back their top 2 wideouts. Their defense will need some extra help this season, as a few key players graduated.  The game that should decide if South Alabama will cover will be the home game against Georgia State.  Georgia State will have a new quarterback this season and could cost Georgia State some wins throughout the season.  I’m going with the Jaguars to get a home win here, as this should push the win total over.  Therefore, I’m taking the over on South Alabama during the 2020 season, as I like for their win total to increase by at least 2 wins. The Jaguars also avoid Appalachian State during the 2020 campaign.