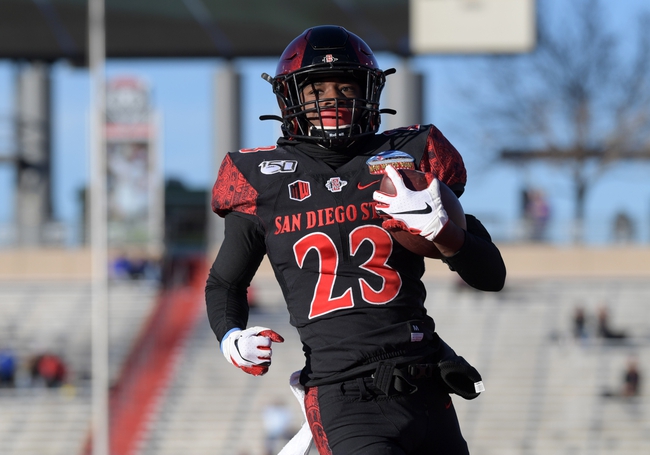 The San Diego State Aztecs will be looking to build off of a 2019 campaign that saw the program finish 2nd place in the Mountain West “West” division.  San Diego State finished the 2019 season with an overall record of (10-3), while going (5-3) in Mountain West play.  The offense averaged 21.2 points per contest, which wasn’t stellar, ranking 112th at the FBS level.  The defense is what carried the team throughout the season.  The defense was stout all season, ranking 2nd in allowing the fewest points per contest.  San DiegoState allowed just under 13 points per game.  The program is under the direction of Rocky Long.

The offense was led by quarterback Ryan Agnew.  Agnew passed for 2,462 yards, 14 touchdowns and 6 interceptions, however he was a senior during the 2019 season.  Carson Baker looks to be the guy for the 2020 campaign.  He completed 79 percent of passes out of 24 attempts in limited playing time as a freshman. The backfield was by committee, as San Diego State had 4 running backs range between 355-500 yards rushing for the season.  Chase Jasmin returns for his senior season, as he rushed for 366 yards and 4 scores during the 2019 campaign.  San Diego State was led in the receiving core by Kobe Smith.  Smith collected 691 yards receiving, while adding 4 touchdowns as a sophomore.  Jesse Matthews also returns for the program, as he was second on the team in receptions and receiving yards last season. He totaled 48 receptions for 633 yards.

As a team the defense collected 31 sacks and 18 interceptions.  The defense was very active in the passing game, registering 18 picks and 61 pass break ups.  The defense was led by linebacker Kyahva Tezino.  Tezino had a team leading 99 tackles, but has since signed with the New England Patriots.  Cameron Thomas brought consistency in the pass rush department.  Thomas had a team high 5.5 sacks as a freshman.  Luq Barcoo was one of the best defensiev backs across all of college football last season.  Barcoo recorded 16 pass break ups, while finishing the 2019 season with 9 interceptions.  However, Barcoo was signed by the Jacksonville Jaguars.  Tariq Thompson will look to up his level of play, as Barcoo was instrumental in helping the defense become as good as they were.  Thompson finished the 2019 year with 8 pass break ups and 4 interceptions.

Let us take a look at the San Diego State schedule for the 2020 season.

The projected win total is set at 7.5 wins.  San Diego State will be 2-2 in non-conference play at worst.  The Aztecs lucked out and don’t have to face Boise State or Air Force this season.  The two programs combined to go 23-4 last season.  San Diego State does face Utah State at home this season, but Utah State is down from a season ago.  While San Diego State will be transitioning a new quarterback, the rest of the offense returns.  The offensive numbers should go up from last season.  Even though the defense won’t be as talented as a year ago, it is hard to imagine a huge regression there.  I’m going to take the over, as San Diego State matches up well in Mountain West play yet again this season.