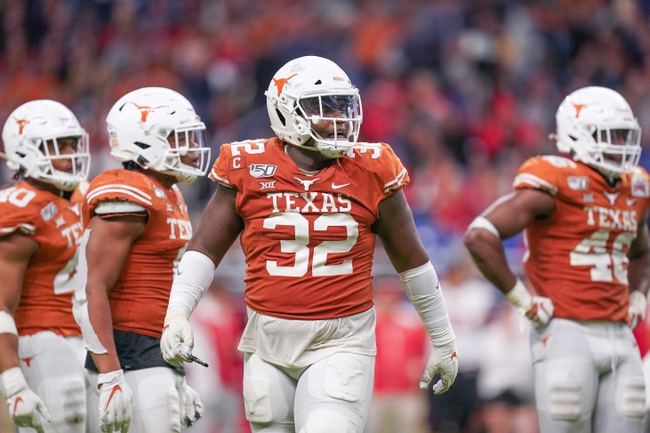 The Texas Longhorns will be looking to build off of a 2019 campaign that saw the program finish 3rd in the Big 12.  Texas finished the 2019 season with an overall record of (8-5), while going (5-4) in conference play.  The offense averaged  35.2 points per game, which ranked 17th at the FBS level.  The defense allowed an average of 27.5 per game. The program is under the direction of Tom Herman.

The offense was guided by quarterback Sam Ehlinger.  Ehlinger passed for 3,663 yards, while throwing 32 touchdowns and 10 interceptions.  Ehlinger enters his senior season during 2020.  The backfield was paced by Keaontay Ingram.  Ingram rushed for 853 yards and 7 touchdowns.  The offense will have to overcome the loss of wideout Devin Duvernay.  Duvernay was drafted by the Baltimore Ravens in the 3rd round, after reeling in 106 receptions for 1,386 yards and 9 touchdowns.  Collin Johnson was second on the team in receptions and receiving yards, but was also drafted during the 2020 NFL Draft.  Johnson was taken by the Jacksonville Jaguars.  Brennan Eagles will need to step up and help fill the void, as he enters his junior year.

As a team the defense totaled 27 sacks and 12 interceptions.  The defense was led by linebacker Joseph Ossai.  Ossai had a team high 90 tackles as a sophomore, while also adding 5 sacks.  He returns for the 2020 campaign.  Defensive lineman Ta’Quon Graham contributed 3.5 sacks, as he will be looking to build off of that for his senior year.  The secondary was paced by D’Shawn Jamison.  Jamison collected 3 interceptions and 3 pass break ups, while totaling 35 tackles.  Jamison is entering his junior year for Texas.

Let us take a look at the Texas schedule for the 2020 season.

The Longhorns open the season with a home game against South Florida.  Texas will then hit the road for a tough matchups with LSU, before returning home to host UTEP.

The projected win total is set at 9.5 wins.  The win total is projected 1.5 wins higher than what Texas finished with in the 2019 season, with one of them wins coming in the Valero Alamo Bowl against Utah.  Texas will be 2-1 in non-conference play heading into their conference opener at Kansas State.  Texas has the luxury of bringing back their starting quarterback Sam Ehlinger from last season.  Ehlinger gives Texas multiple options, as he is a dual threat quarterback.

In order for Texas to cover this total, the Longhorns would only be able to lose 2 games.  Those two games are more than likely LSU and Oklahoma.  However, the receiving core is a bit depleted from last season, with two players being drafted.  I’m going to side with the under, as a road game to end the season at Oklahoma State ends the chances of Texas covering the over.  I think Texas going 9-3 is appropriate, as the program ups their win total by 2 from last season’s 7 regular season wins. .