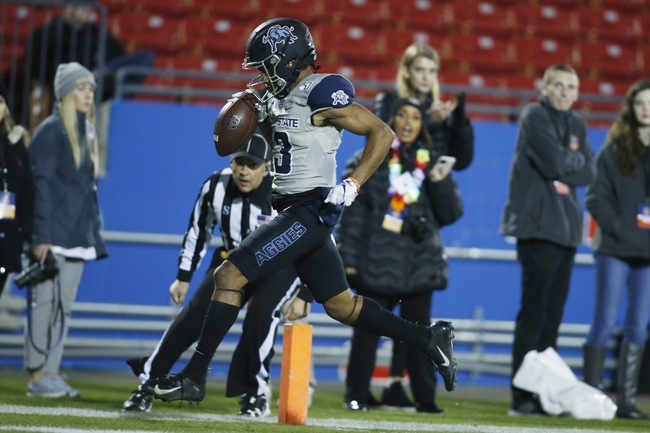 The Utah State Aggies will be looking to improve off of a 2019 campaign that saw the program fall in their bowl game to Kent State, 51-41.  Utah State finished the 2019 season with an overall record of (7-6), while going (6-2) in Mountain West play.  The offense averaged 29.2 points per contest, which ranked 64th at the FBS level.  The defense struggled to keep teams off the scoreboard. The defense allowed nearly 31 points per game.  The head coach for Utah State is Gary Anderson.

The offense was led by recent draft pick Jordan Love.  Love passed for 3,402 yards, 20 touchdowns, and 17 interceptions.  Henry Colombi looks to have a chance at leading this offense.  Colombi passed for 221 yards, while throwing 2 touchdowns and 1 pick in limited playing time.  The backfield will be looking to fill a void left by Gerold Bright.  Bright rushed for 921 yards and 9 scores as a senior.  Jaylen Warren looks to fill that void.  Warren enters his senior season, after rushing for 569 yards and 5 touchdowns as a junior.  The program will have to also overcome the loss of wideout Siaosi Mariner.  Mariner reeled in 63 receptions for 987 yards and 10 touchdowns.  He was signed by the Las Vegas Raiders. Wideout Jordan Nathan looks to have an increase in targets, as he enters his senior season.

As a team the defense collected 24 sacks, while forcing 24 turnovers.  The defense was guided by safety Troy Lefeged Jr.  Lefeged had a team leading 103 tackles, while also adding 2 sacks. He will be entering his senior season.  Tipa Galeai totaled 5 sacks last season, but signed with the Green Bay Packers.  Nick Heninger returns for a senior season, after recording 5 sacks.  Shaq Bond looks to pace the secondary along with Lefeged.  Bon contributed 5 pass break ups and 3 interceptions as a junior.

Let us take a look at the Utah State schedule for the 2020 season.

The projected win total is set at 5.5 wins.  Utah State has some big holes to fill from last season.  This is a team that won just 7 games, with a quarterback that was drafted in the first round of the 2020 NFL draft. Seeing that Utah State will need to insert a quarterback with little experience at the college ranks, I’m going to take the under.  The non-conference slate could be rough, as a 1-3 record seems very realistic, with the lone win against Southern Utah. The Aggies will need a ton of improvement on defense to help keep them in games during 2020, as their offensive points per game average is more than likely going to regress.