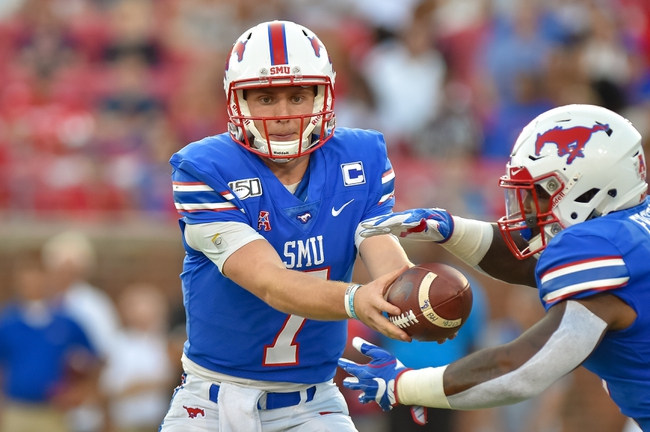 The SMU Mustangs will be looking to mirror their 2019 season at the very least.  SMU finished the 209 campaign in 3rd place in the American West, in what was an exciting finish.  SMU finished with an overall record of (10-3), while going (6-2) in AAC play.  The offense was one of the more potent teams at the FBS level during 2019.  The offense averaged 41.8 points per contest, which ranked 7th.  The defense was not as good, allowing 33.4 per game.  The program is under the direction of Sonny Dykes.

The offense was guided by quarterback Shane Buechele.  Buechele passed for 3,929 yards, while throwing 34 touchdowns, and 10 interceptions.  The quarterback will be entering his senior season, hoping to up his draft stock. The backfield will have to overcome the loss of Xavier Jones.  Jones rushed for over 1,250 yards and totaled 23 touchdowns.  However, he was signed as an undrafted free agent by the Rams. TJ McDaniel looks to see an increase in playing time, after rushing for 236 yards and 3 scores as a freshman.  Star wideout James Proche was drafted by the Baltimore Ravens in the 6th round.  Proche reeled in an astonishing 111 receptions for 1,225 yards, while registering 15 touchdowns.  The good news is the program returns two players that totaled at least 700 yards receiving a season ago.  Those two players are Reggie Roberson Jr and Kylen Granson.  Roberson collected 803 yards receiving and 6 touchdowns, while Granson registered 721 yards and 9 scores.

As a team the defense recorded 52 sacks, while forcing 21 turnovers. The defense struggled at times to stop teams, but did show a solid pass rush, while being able to force turnovers at crucial times. The defense was paced by linebacker Richard McBryde.  McBryde had a team leading 99 tackles, but he was a senior.  Safety Patrick Nelson had a team high 12 sacks, while collecting 80 tackles.  However, Nelson was also a senior.  Delontae Scott contributed 10.5 sacks, but was signed as an undrafted free agent by the Green Bay Packers.  Safety Rodney Clemons will follow the trend and will not return either.  Clemons signed as an undrafted free agent with the Kansas City Chiefs, after having 9 pass break ups and 4 interceptions. The moral of the defense here is, the program lost mainly all their core players from last season.  This does not bode well for a defense that ranked 110th in points allowed last season.

Let us take a look at the SMU schedule for the 2020 season.

The Mustangs will be opening the season with four straight non-conference opponents.  All four non-conference matchups are against in-state schools.  These games feature: Texas State, SFA, North Texas, and TCU.  SMU should have no trouble winning the first 3 games, before falling to TCU.

The projected win total has been set at 7.5 wins.  The good news for SMU is there are more than a handful of teams that like to allow as many points as they score.  The Mustangs did lose some talent on offense. However, the program has the luxury of senior quarterback Sane Buechele guiding this offense during 2020.  The defense looks like it could struggle for back to back seasons.  Although, SMU should be in a lot of high scoring games.  I wouldn’t be surprised to see the Mustangs win games, when both teams score in the range of the 30’s or even 40’s.  I’m going to side with the over here, but don’t expect some of these wins to be pretty.