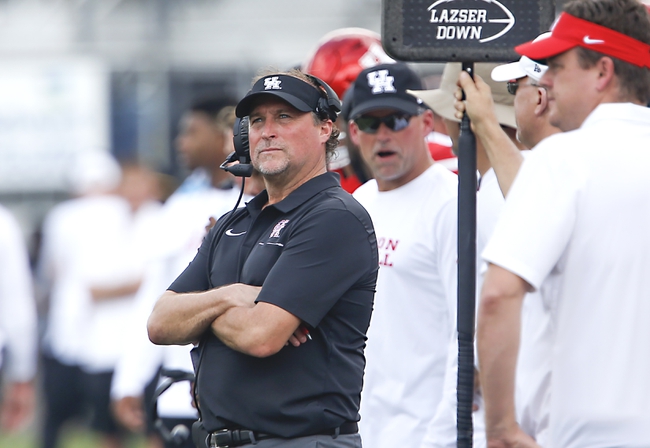 The Houston Cougars will be looking to right the ship during the 2020 season.  The program finished 2nd to last in the American West during the 2019 season.  Houston finished the 2019 campaign with an overall record of (4-8), while going (2-6) in AAC play.  The offense averaged 30.7 points per contest, which ranked 51st at the FBS level.  The defense allowed 34 points per game, as that was near the bottom at the college football ranks.  The program is under the direction of Dana Holgorsen.

The offense was guided during the 2019 season by quarterback Clayton Tune.  Tune passed for 1,533 yards, while throwing 11 touchdowns and 9 picks.  The backfield was carried by Kyle Porter.  Porter will be a senior during the 2020 season, after rushing for 616 yards, while finding the end zone 3 times.  The program does return star wideout from a season ago, Marquez Stevenson.  Stevenson hauled in 52 receptions for 907 yards and 9 scores.  Jeremy Singleton also returns, as he was second in receiving yards behind Stevenson.  Singleton reeled in 26 receptions for nearly 400 yards, while snagging 3 touchdown receptions.

As a team the defense recorded 21 sacks, but only forced 14 turnovers.  The defense was led by safety Grant Stuard.  Stuard had a team high 97 tackles, while adding 1 sack.  The safety enters his senior season looking to build off of the 2019 year.  The safety was all over the field during 2019, as the next closest had just 73 tackles.  Defensive lineman David Anenih had a team leading 5 sacks as a junior.  Safety Deontay Anderson recorded 9 pass break ups as a junior.  Both Anenih and Anderson return for the 2020 season.  If Houston wants to improve from last season, the defense needs to do a better job of creating and forcing turnovers.

Let us take a look at the Houston schedule for the 2020 season.

The Cougars open the season with two straight non-conference games.  Houston plays host to in-state foe Rice, before heading to Washington State.  The rest of the non-conference slate features a home game against North Texas and a road matchup with BYU.

The projected win total is set at 5.5 wins.  The offense returns all of their core offensive players, which should help secure at least 2 non-conference wins.  The program has a brutal conference schedule, as Houston has to play all 5 teams that collected at least 10 wins a season ago.  Those games feature: Cincinnati, UCF, Memphis, Navy, and SMU.  However, the good news for Houston fans, the university plays host to Tulane, South Florida, and Tulsa.  Coach Dana Holgorsen should be able to get his team hyped up to win those three home games.  Those 3 wins plus at least 2 non-conference wins puts the win column at 5.  Seeing how much skill the offense has returning, plus a few key players on defense returning, I’m gonna put stock in Houston winning either at Washington State or BYU, as both games could go either way.  Therefore, I’m going to take the over, as I like for Houston to get to a bowl game during the 2020 season.