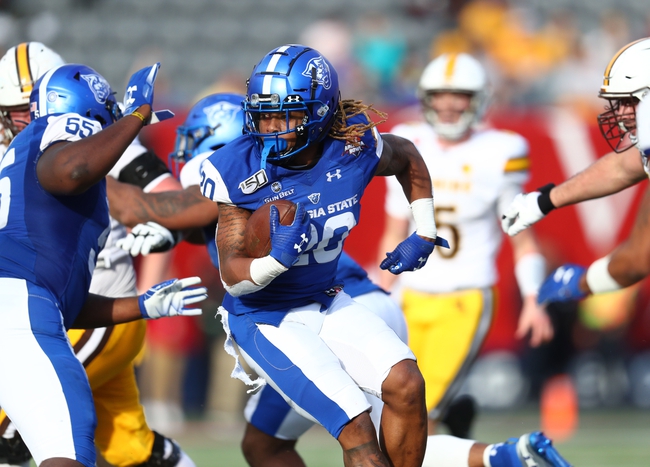 The Georgia State Panthers will be looking to build off their 2019 campaign.  Georgia State finished the 2019 season with an overall record of (7-6), while going (4-4) during Sun Belt play.  The offense averaged 31.2 points per contest, which ranked 47th.  The defense allowed an average of 36.2 per game, which was near the bottom at the FBS level.  The program is under the direction of Shawn Elliot.

The offense was paced by quarterback Dan Ellington.  Ellington was a senior during the 2019 season and passed for 2,447 yards, while throwing 22 touchdowns and 8 interceptions. The quarterback also rushed for 6 touchdowns, while rushing for over 650 yards.  Cornelious Brown should have a solid chance to take over the starting quarterback role for the 2020 season. The offense will also have to overcome the loss of running back Tra Barnett.  Barnett rushed for over 1,450 yards and 12 touchdowns as a senior.  Destin Coates should see an increase in snaps out of the backfield, as he rushed for 546 yards and 7 scores as a sophomore. Cornelius McCoy is back for the program, after hauling in 70 receptions for 757 yards and 5 touchdowns as a sophomore.

As a team the defense registered 21 sacks and 9 interceptions.  The defense was led by linebacker Trajan Stephens-McQueen.  McQueen recorded a team leading 107 tackles, while adding 2 sacks.  He returns for his senior season.  Defensive end Hardrick Willis had a quiet 4.5 sacks during 2019.  Willis will be looking to up that total during 2020.  Quavian White contributed 7 pass break ups and 2 interceptions in the secondary.

Let us take a look at the Georgia State schedule for the 2020 season.

The Panthers play host to Murray State to open the season.  Murray State is a member of the Ohio Valley Conference at the FCS level.  The rest of the non-conference schedule includes road games at Alabama and Charlotte.

The projected win total is set at 5 wins.  The projected total is set for 2 wins fewer than what the program accomplished during the 2020 season.  This will be an offense that will have to overcome the loss of their starting quarterback and running back from last season.  The defense was not up to par last season, ranking 121st in most points allowed per contest.  Looking at the schedule, Georgia State has to play both Appalachian State and Louisiana.  The two schools combined to go 24-4 last season.  However, Texas State is not on the schedule, after going 3-9 a year ago.  The Panthers return some talent, but with little to no experience at the quarterback position, I’m going to take the under, as Georgia State should push the win total at best.