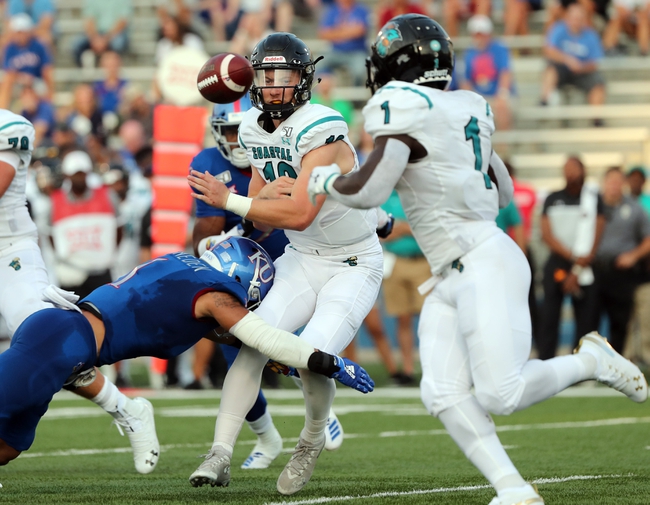 The Coastal Carolina Chanticleers will be hoping to rebound from a 2019 season that saw the program finish in the basement of the Sun Belt East.  Coastal Carolina finished the 2019 season with an overall record of (5-7), while going (2-6) during Sun Belt play.  The offense averaged 30.5 points per contest, which ranked 55th at the FBS level.  The defense was not as good, allowing an average of 30.5 per contest.  The program is under the direction of Jamey Chadwell.

The offense saw four different quarterbacks attempt a pass during the 2019 season.  However, only two saw considerable playing time.  Fred Payton passed for 1,421 yards,while throwing 12 touchdowns and 7 picks as a sophomore. Bryce Carpenter passed for 927 yards, while throwing 8 touchdowns and 2 interceptions.  Carpenter added nearly 400 yards rushing.  The backfield welcomes back CJ Marable.  Marable rushed for over 1,000 yards as a junior.  The incoming senior rushed for 1,085 yards, while finding the end zone 11 times a season ago.The program's leading receiver from the 2019 campaign also returns.  Jaivon Heiligh reeled in 46 receptions for 497 yards and 3 scores.  Tight end Isaiah Likely will be back, as he is a great red zone target.  He finished the 209 season with a team leading 5 touchdown receptions.

As a team the defense registered 21 sacks and 11 interceptions.  The defense was led by linebacker Teddy Gallagher.  Gallagher had a team leading 87 tackles, while forcing a fumble.  He returns for his senior season. Defensive end Tarron Jackson had a team high 10 sacks as a junior.  Jackson will be trying to build off the 2019 season, to help rise his draft stock. The program will have to overcome a key loss in the secondary.  Chandler Kryst had 6 pass break ups and 5 interceptions last season, as a senior.

Let us take a look at the Coastal Carolina schedule for the 2020 season.

The Chanticleers open the season with their non-conference slate.  Coastal Carolina will be on the road for two of these games, while playing host for two of them.  Coastal Carolina opens the season at SEC member South Carolina, before traveling to Eastern Michigan.  The two home games are against Duquesne and Kansas.  The Chanticleers upended Kansas during 2019.  The only Sun Belt team the program will not face in 2020 is UL Monroe.

The projected win total is set at 5 wins.  This is a program that returns quite a bit of talent from last season, especially on the offensive side.  It would not surprise me to see Coastal Carolina go 3-1 in non-conference play, with the lone loss to South Carolina.  Coach Chadwell’s team has some very winnable games in Sun Belt Conference play, as the team faces South Alabama at home, while having to travel to Texas State.  Besides those two wins, the program has some toss up games, like a game at Troy.  I’m going to side with the over, as the offense has a great chance to increase their point average from a season ago.  The defense will give up their fair share, but look for the offense to keep pace with opposing teams.