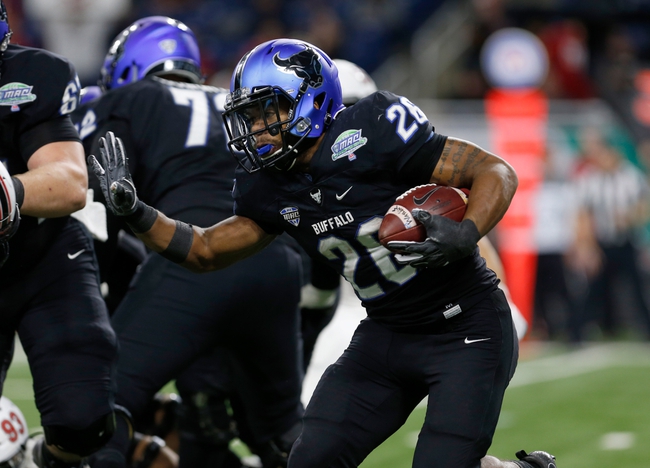 The Buffalo Bulls will be looking to move up the MAC East come the 2020 season.  Buffalo finished the 2019 season with an overall record of (8-5), while going (5-3) in MAC play.  Buffalo finished in 4th place on the East side.  The offense averaged 31.5 points per game, which ranked 46th at the FBS level.  The defense allowed an average of 21.3 per game.  The defense ranked 21 in allowing the fewest points per contest.  The program is under the direction of Lance Leipold.

The offense was led by quarterback Kyle Vantrease.  Vantrease passed for 1,193 yards, 8 touchdowns, and 2 interceptions. He also added 6 rushing touchdowns.  The backfield was carried by sophomore workhorse Jaret Patterson.  Patterson rushed for 1,799 yards and 19 touchdowns.  It will be tough for Patterson to surpass that total this season, but the running back has rushed for over 1,000 yards in his first two collegiate seasons.  Wideout Antonio Nunn returns for the program, after reeling in 49 receptions for 687 yards and 6 touchdowns as a junior.

As a team the defense was guided by safety Joey Banks.  Banks had a team high 87 tackles while also adding 1 sack during his senior campaign.  Overall the team collected 43 sacks, while forcing 22 turnovers.  The pass rush was paced by defensive end Taylor Riggins.  Riggins totaled 8.5 sacks and will be looking to build off of that for his senior year.  Safety Tyrone Hill is back and will be hoping to help lockdown the secondary.  Hill recorded 71 tackles and had 10 pass break ups as a junior.

Let us take a look at the Buffalo schedule for the 2020 season.

The Bulls will begin play with a road contest at Big 12 member Kansas State.  The rest of the non-conference slate features games against St. Francis (PA), Ohio State, and Army.

The projected win total is set at 7 wins.  Buffalo should not see a regression on offense, as this offense should be very potent during MAC play.  Patterson will be no doubt on scouts radar, as he is now leaving his underclassman years and is preparing for his junior season.  The running back is one of the best players in the MAC and he should be able to help lead a balanced offensive effort.  Vantrease did not play a full season last year, but look for him to elevate his play.  Buffalo has the luxury of playing both Bowling Green and Akron during 2020.

The MAC was very balanced all season long a year ago, as no team really wanted to run away with their respective division.  Buffalo should have as good of offense as any team this season.  The program will have an experienced offensive line that will only continue to help Patterson put on a display.  I like the chances of Buffalo going undefeated on their home turf, which would mean at least 5 wins.  I also like for Buffalo to secure at least 2 road wins, those two road wins are against Bowling Green and Western Michigan.  Therefore I’m going to side with the over, because at worst I see the Bulls pushing the win total.