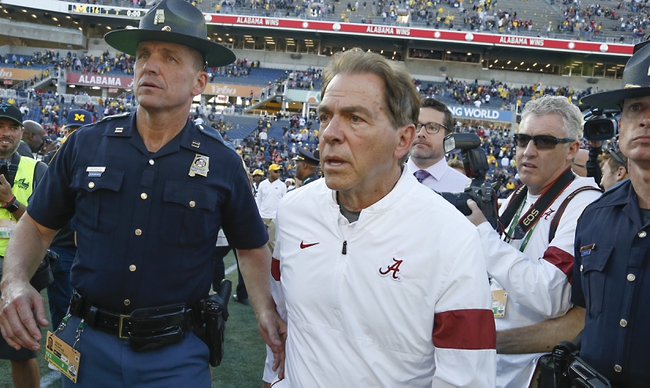 The Alabama Crimson Tide will be looking to sustain their dominance at the college football ranks.  Coach Nick Saban will be looking to leapfrog LSU during the 2020 campaign.  Abalama finished the 2019 season with an overall record of (11-2), whie going (6-2) in SEC play.  The offense averaged 47.2 points per contest, which ranked 2nd at the FBS level.  The defense ranked 13th in fewest points allowed, allowing an average of 18.6.

The offense was paced by the 5th draft pick in the 2020 NFL Draft, Tua Tagovailoa.  Tagovailoa passed for 2,840 yards, while throwing 33 touchdowns and 3 picks.  Mac Jones should be able to slide in and take over for the recent draft pick.  Jones passed for 1,503 yards, while throwing 14 touchdowns and 3 interceptions, during parts of the 2019 campaign when Tua was hurt.  Taulia Tagovailoa the brother of Tua recently entered into the transfer portal.  Running back Najee Harris rushed for 1,224 yards and 13 scores.  Harris will be back for his senior season. DeVonta Smith had a team high in receiving yards a season ago.  He reeled in 68 receptions for 1,256 yards and 14 touchdowns.  Smith returns for his senior season. Alabama will have to overcome the loss of both wideouts, Jerry Jeudy and Henry Ruggs III.

As a team the defense registered 32 sacks and 17 interceptions, while also recovering 11 fumbles.  The defense was led by safety Xavier McKinney.  McKinney had a team high 95 tackles, while adding 3 sacks.  However, McKinney was drafted by the New York Giants in the 2nd round.  Linebacker Anfernee Jennings had a team leading 8 sacks.  Jennings was taken in the 3rd round by the New England Patriots.  Safety Jared Mayden contributed 4 interceptions and 3 pass break ups.  He has also moved onto the NFL.  Linebacker Shane Lee returns for the 2020 campaign.  Lee was second on the team in tackles with 86.  The incoming sophomore also added 4.5 sacks.

Let us take a look at the Alabama schedule for the 2020 season.

The Crimson Tide open the season with three of their first four games being non-conference matchups.  Alabama plays USC, Georgia State, and Kent State during that stretch.  Their last non-conference game is on November 14th against Ut Martin, a Ohio Valley Conference member out of the FCS.

The projected win total is set at 10.5.  Alabama never seems to regress after their previous season.  Alabama will be guided by Harris, Smith, and Jones on offense, who have enough experience to be explosive in the SEC.  While the defense did lose a lot of play makers, Nick Saban's teams always seem to rebound just well from the losses, as underclassmen step in and perform up to the Crimson Tide standards.  Alabama has the luxury of playing both Georgia and Auburn at home.  I’m not going against Nick Saban and company, I’m taking the over here.