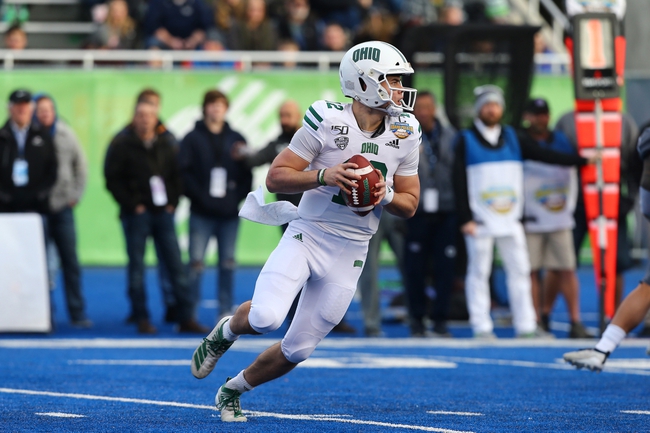 The Ohio Bobcats will be looking to build off of a 2019 campaign that saw the program finish 2nd place in the MAC East.  Ohio finished the 2019 season with an overall record of (7-6), while going (5-3) in MAC play.  The offense finished in the top 20 in points score per game, averaging over 34 per contest.  The defense allowed an average of 26.5.  The program is under the direction of Frank Solich.

The offense was guided  by senior quarterback Nathan Rourke.  Rourke passed for 2,820 yards, 20 touchdowns, and 5 interceptions.  However, Ohio will be looking at someone different to pace the offense, as he was a senior last season.  Drew Keszei looks to have a solid chance at the starting quarterback spot for the 2020 season, while Joe Mischler should be in the mix.  Running back Allison O’Shaan rushed for 869 yards and 6 touchdowns a season ago.  He is back for Ohio, as he enters his sophomore season.  The backfield will also have the likes of De’Montre Tuggle.  Tuggle rushed for 644 yards and 11 touchdowns.  He will be entering his senior year.  Look for both running backs to see plenty of time. Isiah Cox reeled in 39 receptions for 663 yards and 2 scores.  Don’t be surprised to see the wideout’s numbers increase, as he enters his junior year.

As a team the defense collected 24 sacks, while forcing 15 turnovers.  The defense was led by safety Javon Hagan.  Hagan registered a team leading 102 tackles, while adding 5 pass break ups.  However, Hagan was signed as an undrafted free agent by the Tampa Bay Buccaneers.  Austin Conrad took control on the defensive line, having a team high 4 sacks, while forcing 2 fumbles.  Conrad enters his senior season in 2020.  The secondary was guided by Ilyaas Motley.  Motley recorded 6 pass break ups and 1 interception as a junior.

Let us take a look at the Ohio schedule for the 2020 season.

The Bobcats open the season with 4 straight non-conference matchups. Ohio will play host to North Carolina Central, before hitting the road for a game at Boston College. The other 2 non-conference contests are against Marshall at home, while having to visit Texas State.

The projected win total is set at 7.5 wins.  Right off the bat 3 wins come to mind.  Besides playing North Carolina Central, Ohio also has the luxury of playing Bowling Green and Akron.  Both Bowling Green and Akron have had dark times during the last few seasons within their program.  In order to cover this win total, this would mean an increase in wins from the 2019 season.  While the program returns their 2 key running backs from a season ago, plus their top wideout, I’m hesitant about taking the over.  The quarterback position is ultimately a question mark at this point and with both quarterbacks having played very little during the 2019 season, I’m not sure what to expect.  With the quarterback spot being inexperienced, I’m going to side with the under, but I’ll still give Ohio and the coaching staff the benefit of the doubt to get back to another bowl game during the 2020 season.