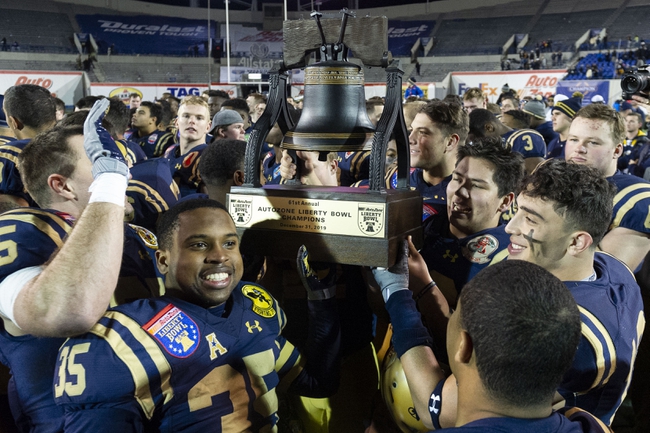 The Navy Midshipmen will be looking to improve off of a 2019 season that saw the program finish 2nd place in the AAC West.  Navy finished the 2019 season with an overall record of (11-2), while going (7-1) in AAC play.  The offense consistently put up points all season long, averaging 37.2 per game, which ranked 12th at the FBS level.  The defense allowed just over 22 per game.  The program is under the direction of Ken Niumataolo.

The triple threat offense was guided by quarterback Malcolm Perry.  Perry passed for 1,084 yards, 7 touchdowns, and 3 picks.  The quarterback rushed for over 2,000 yards, while crossing the goal line 21 times.  However, he was drafted by the Miami Dolphins in the 7th round of the 2020 Draft.  Running back Jamale Carothers rushed for 734 yards and 14 touchdowns.  Carothers was just a sophomore, so he is returning for his junior year.  Navy rushed for a combined 52 touchdowns during 2019.  Mychal Coopers returns for a junior season, after reeling in 18 receptions for 380 yards and 2 scores during the 2019 campaign.  Quarterback Perry Olsen looks to have a chance at the opening at quarterback.

As a team the defense totaled 30 sacks and 12 interceptions.  The defense was led by linebacker Diego Fagot.  Fagot had a team high 100 tackles, while also collecting 5.5 sacks.  He was a sophomore a year ago, so he is back for a junior season.  Linebacker Jacob Springer has paced the defense with a team leading 8 sacks.  Springer returns for a senior season. Safety Evan Fochtman contributed 5 pass break ups and 2 interceptions as a junior.

Let us take a look at the Navy schedule for the 2020 season.

The Midshipmen open the season with two straight non-conference games.  Navy plays at a neutral site against Notre Dame, before playing host to Lafayette.  The rest of the non-conference slate features both the Air Force and Army.

The projected win total is set at 7.5 wins.  Navy should see the same strength on the defensive side of the ball, as their key playmakers return for the 2020 campaign.  The point of concern will be the quarterback spot.  The program will have to overcome the loss of Malcolm Perry.  Perry was responsible for 3,101 yards last season.  However, Coach Niumataolo hasn’t had trouble finding quarterbacks to run the triple threat styled offense over the years.  The defense will keep this program in games this season, even if the offense struggles to find consistency at times.  It is hard to defend the triple threat offense if you use it right.  Ken Niumataolo knows how to use it, therefore I’m siding with the over here.