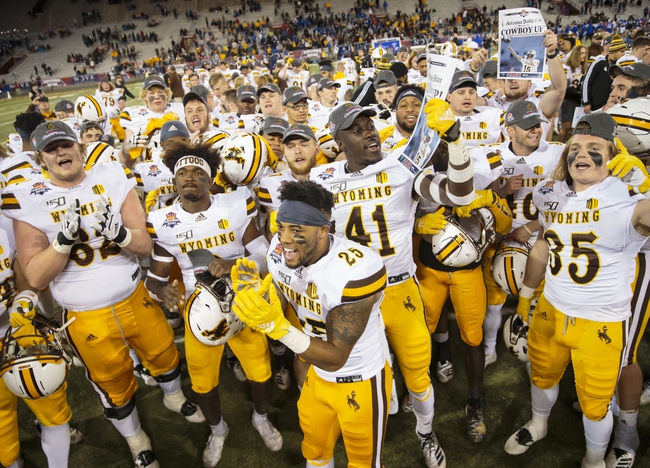 The Wyoming Cowboys will be looking to get back to another bowl game during the 2020 season.  Wyoming finished the 2019 season with an overall record of (8-5), while going (4-4) during Mountain West play.  The program participated in the Nova Home Loans Arizona Bowl and secured a victory over Georgia State.  The offense averaged 25.4 points per contest, which ranked 91st at the FBS level.  The defense was one of the best in the country, ranking 11th in fewest points allowed per contest.  The defense allowed less than 18 points per game.  The program is under the direction of Craig Bohl.

The offense saw three different quarterbacks attempt at least 39 passes during the 2019 season.  Sean Chambers saw the most time under center.  Chambers passed for 915 yards, while throwing 7 touchdowns and 3 interceptions as a freshman.  The freshman quarterback also rushed for 567 yards and 10 touchdowns.  The backfield returns a 1,000 yard rusher from a season ago.  Xazavian Valladay rushed for 1,265 yards and 6 touchdowns as a sophomore.  The offense lost their top 2 wideouts in production from last season, as both were seniors.

As a team the defense recorded 31 sacks and forced 20 turnovers.  The defense recovered 8 fumbles, while forcing 14during the 2019 campaign.  The defense was led by safety Alijah Halliburton.  Halliburton totaled 130 tackles, which was a team high.  However, he was a senior.  Solomon Byrd did his part on defense, as he had a team lead of 6.5 sacks as a freshman.  Linebacker Logan Wilson was second on the team with 105 tackles, while registering 7 pass break ups and 4 interceptions.  Although, just like Halliburton, Wilson will not return either.  Keyon Blankenbaker contributed 10 pass break ups and will be back for the 2020 season.

Let us take a look at the Wyoming schedule for the 2020 season.

The Cowboys open the season with their non-conference slate.  The non-conference schedule features home contests against Weber State and Utah, while traveling to Louisiana and Ball State.

The projected win total is set at 6 wins.  The odds makers outlook is that a regression in wins is possible, as Wyoming finished with 7 regular season wins during 2019.  A 2-2 record during non-conference play is more than realistic, as the Cowboys should fall to Utah and Louisiana.  Wyoming gets a tough draw this season inside Mountain West play, as the program plays 3 of the 4 teams that had at least 10 wins last season.  This is a team that has a lot of pieces to put into their right place.

Wyoming is by no means going to be bad this season, as this team still has returning players on the defensive side of the ball, who were key players.  The team will just have to replace their top defensive players.  A 6 win team would mean another postseason berth.  Coach Craig Bohl has done a nice job in putting winning teams on the fields.  With a returning quarterback and running back, plus a team led by Coach Bohl, I’m siding with the over, as this team should at least be able to finish 6-6.