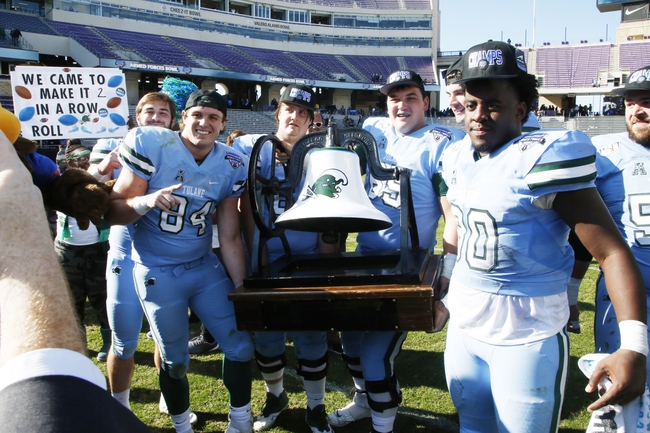 The Tulane Green Wave are coming off a 2019 season that saw the program secure a win in the Lockheed Martin Armed Forces Bowl.  Tulane finished the 2019 season with an overall record of (7-6), while going (3-5) in AAC play.  The offense averaged 33.1 points per contest, which ranked in the top 30 at the FBS level.  The defense allowed 26.3 points per contest, which ranked 56th.  The program is under the direction of Willie Fritz.

The offense was carried last season by senior quarterback Justin McMillan.  McMillan passed for 2,444 yards, 17 touchdowns, and 10 touchdowns.  McMillan also added 745 yards rushing and an additional 12 scores.   Keon Howard saw limited action last season, passing for 208 yards and 2 touchdowns, while completing 72 percent of passes.  Howard looks to have a shot at the starting quarterback role.  Tulane also lost running back Corey Dauphine.  Dauphine was a senior and rushed for 575 yards and 7 touchdowns.  Amare Jones brings solid experience to the 2020 team, as he rushed for 371 yards and has totaled 8 rushing touchdowns in his first two seasons.  The program will also have to fill a void on the depth chart in the receiving core.  Darnell Mooney had a nice season for Tulane, reeling in 48 receptions for 713 yards.  He was drafted in the 5th round by the Chicago Bears.  Wideout Justin McCleskey signed as an undrafted free agent with the Atlanta Falcons.

As a team the defense registered 21 sacks, while forcing 16 turnovers during the 2019 campaign.  Tulane saw leadership from safety Chase Kuerschen during the 19’ season.  The safety led the team in tackles with 76, while also adding 2 interceptions.  He returns for his senior season.  Defensive end Patrick Johnson returns for his senior season.  Johnson had a team high 4 sacks for Tulane a season ago.  Tulane fans did see strong play out of sophomore safety Larry Brooks last season.  Brooks contributed 4 pass break ups and 4 interceptions, while adding 25 tackles.

Let us take a look at the Tulane schedule for the 2020 season.

The Green Wave open the season with a home game against FCS member Southeastern Louisiana.  The rest of the non-conference schedule features road games at Northwestern and Mississippi State, while also playing host to Army.

The projected win total is set at 5.5 wins.  Tulane should no doubt start the season with a win against Southeastern Louisiana.  It is worth noting that Southeastern Louisiana gave Ole Miss a run for their money last season, before falling 40-29. The Green Wave will then head to Big Ten member Northwestern.  Yes, Northwestern has struggled recently, but do have a veteran head coach at the helm.  This will be a Tulane team won’t be all that experienced on the offensive side and will have a real test against a Big Ten defense.  I’ll side with pat Fitzgerald to get a win here and hand Tulane a loss.  Tulane will run into a wall at Mississippi State and should beat Army later on in the season.  I’ll give Tulane a 2-2 record in non-conference play.

Tulane will have a tough draw in AAC play, as the Green Wave have to play 4 of the 5 teams that had at least 10 wins during the 2019 season.  Those teams consist of: UCF, Memphis, Navy, and SMU.  The only program Tulane avoids is Cincinnati.  While I’d like to see the underclassman succeed at Tulane, the offense seems like it will be too inexperienced and will have some hiccups to work through.  I’m going to side with the under, as Tulane has a tough conference schedule for a team that lacks a lot of experience on the offensive side.