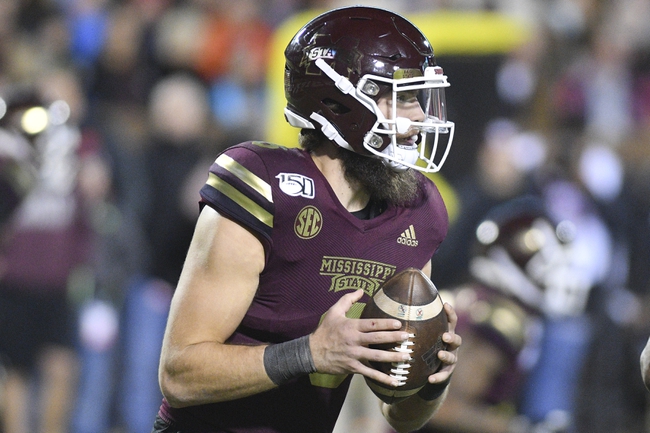 The Mississippi State Bulldogs are hoping to improve off of a 2019 season that saw the program end the season with a loss in the Franklin American Mortgage Music City Bowl.  Mississippi State finished the 2019 season with an overall record of (6-7), while going (3-5) in SEC play.  The offense averaged 27.6 points per contest, which ranked 74th at the FBS level.  The defense also ranked 74th in the FBS in points allowed.  The defense gave up an average of 28.8 points.  The program is under the direction of Joe Moorhead.

The offense was guided by quarterback Garrett Shrader.  Shrader was just a freshman, but passed for 1,170 yards, 8 touchdowns, and 5 interceptions.  Kylin Hill returns for Mississippi State in the backfield, after rushing for 1,350 yards and 10 touchdowns as a junior.  Wideout Osirus Mitchell paced the receiving core with 29 receptions for 430 yards and 6 touchdowns.  The program will be hoping to see wideout JaVonta Payton step up during the 2020 season.  Payton only had 9 receptions for 147 yards during 2019.  However, the offense will have to replace three receivers that either graduated or were signed as an undrafted free agent.

As a team the defense totaled 26 sacks and 10 interceptions, while forcing 18 fumbles and recovering 14 of them.  The defense was led by junior linebacker Erroll Thompson.  Erroll Thompson had a team high 84 tackles. Chauncey Rivers led the defense in sacks with 5.  However, Rivers will not be back, as he is now with the Baltimore Ravens.  Defensive lineman Kobe Jones is back for a senior season, after registering 4 sacks as a junior.  The secondary will be guided by C.J. Morgan is one of the lone defensive backs that was a key part to this defense that returns.  Morgan collected 59 tackles and had had 8 pass break ups, while having 1 interception as a safety.  Three of the key defensive backs from last season will not be back.

Let us take a look at the Mississippi State schedule for the 2020 season.

The Bulldogs open the season with a non-conference matchup at home against New Mexico.  Mississippi State will then head to ACC member NC State.  The rest of the non-conference schedule features home games against Tulane and Alabama A&M.

The projected win total is set at 7 wins.  Mississippi State has a brutal stretch of games in the middle of the season.  The Bulldogs play host to Texas A&M, before hitting the road for back to back games against Alabama and LSU, before returning home to host Auburn.  Mississippi State did luck out and will not have to face Georgia or Florida this season.  Miss State should at least go 3-1 in non-conference play, with their lone loss coming to NC State.  The Bulldogs are losing a lot of key players on defense, especially in the secondary.  This will also be the first full season for Shrader.  Shrader will also be looking for some underclassman to step up in the receiving core.

I’m going to side with the under here.  Mississippi State at best should push this win total, but a 5-6 win season seems more realistic.  This program has a tough stretch of SEC games in the middle of the season, as an 0-4 record during that stretch is very possible.