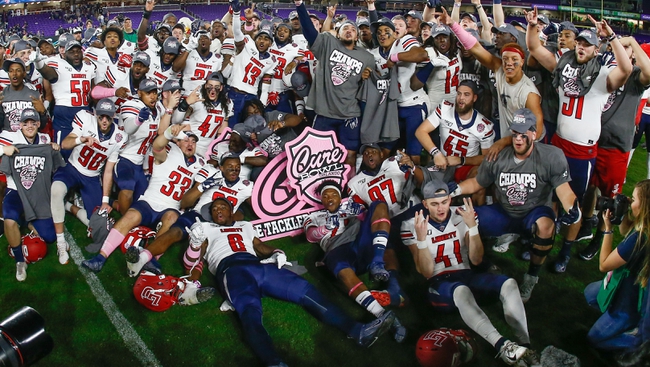 The Liberty Flames will be looking to build off their 2019 season.  Liberty finished the 2019 campaign with an overall record of (8-5).  The program is an independent, therefore does not have a conference record.  The offense averaged 32.8 points per game, which ranked 34th at the FBS level.  The defense gave up an average of 28.1 per contest, which ranked 68th.  The program is under the direction of Hugh Freeze.

The offense was led by quarterback Stephen Calvert.  Calvert passed for 3,663 yards, 28 touchdowns, and 7 interceptions.  However, Calvert was a senior last season.  Quarterback Landon Brown looks to have a good chance at the starting quarterback spot for the 2020 season.  Brown saw limited playing time during the 2019 campaign, passing for just 25 yards.  The backfield will look to replace running back Frankie Hickson.  Hickson rushed for over 1,000 yards and had 12 touchdowns as a senior.  Luckily the coaching staff gave Joshua Mack plenty of time last season.  Mack rushed for 774 yards and 7 touchdowns last season, as a compliment to Hickson.  Mack will no doubt see more opportunities during the 2020 season. The program will have to fill a void with recent 2020 draft pick Antonio Gandy-Golden.  Gandy-Golden hauled in 79 receptions for 1,396 yards, and 10 touchdowns.

As a team the defense totaled 35 sacks and 12 interceptions.  The defense was guided by linebacker Solomon Ajayi.  Ajayi registered a team leading 91 tackles, but did this as a senior and has since been picked up by the Cleveland Browns.  The defense also lost their leader in sacks from a season ago.  Jessie Lemonier recorded 10.5 sacks and is currently part of the Los Angeles Chargers.  Safety Elijah Benton paced the secondary with 85 tackles, a team high 7 pass break ups, and 1 interception.  However, just like Ajayi and Lemonier, he was also picked up by an NFL team after the draft.  The top 3 players on the defense from the 2019 season are gone and will need players to step up.

Let us take a look at the Liberty schedule for the 2020 season.

The Flames have a good mixture of games on their schedule for the 2020 season.  While Liberty plays 2 other independent schools, the program also plays against 3 power five conference schools.

The projected win total is set at 5.5 wins.  Liberty has some very winnable games against: North Carolina A&T, FIU, Bowling Green, Louisiana Monroe, Western Carolina, and UMass. If Liberty won all of those games, this would give Liberty the over.  However, while I think Liberty should win most of these games, due to where these other programs are at currently, this program lacks experience.  The coaching staff will be looking to fill more than a few voids.  While I said Liberty should win the majority of those games, the inexperienced of this team at certain positions will show and will cost Liberty a win here and there.  Therefore, I’m taking the under for Liberty during the 2020 season.