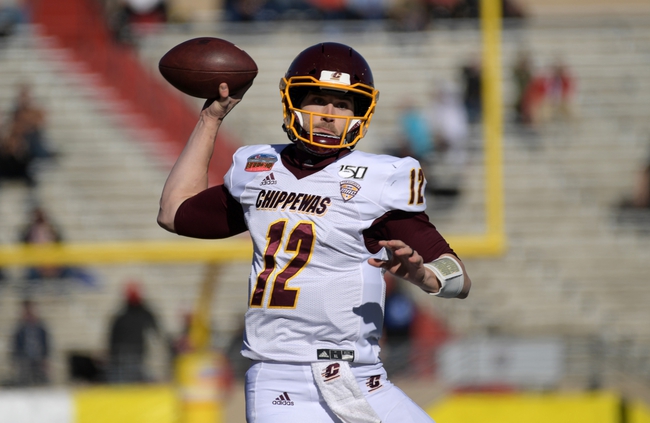 The Central Michigan Chippewas will be attempting to mirror their 1st place finish in the MAC West from the 2019 campaign.  Central Michigan finished the 2019 season with an overall record of (8-6), while going (6-2) in MAC play.  The offense averaged 30.4 points per contest.  The defense ranked 72nd in points allowed per game, allowing 28.3 per game.  The head coach for Central Michigan is Jim McElwain.

The offense saw four different quarterbacks attempt a pass last season.  Quinten Dormady saw the most action, but he was a senior.  David Moore returns for the 2020 season as a senior, after passing for 1,143 yards, 5 touchdowns, and 4 interceptions.  Moore was suspended for parts of the 2019 season. Central Michigan had a very balanced offense, as the program saw two running backs finish with over 1,000 yards rushing a season ago.  Jonathan Ward rushed for 1,108 yards and 15 touchdowns, but was picked by the Arizona Cardinals as an un drafted free agent.  Kobe Lewis rushed for 1,074 yards and 12 touchdowns as a sophomore, but looks to see even more playing time with the departure of Ward.  Wideout Kalil Pimpleton returns after finishing his sophomore season with a team leading 894 receiving yards via 82 receptions.  JaCorey Sullivan added over 800 yards receiving during the 2019 season.  Both receivers contributed a combined 9 touchdowns during the 2019 campaign.  Both wideouts are back for the 2020 campaign.

As a team the defense collected 30 sacks and 13 interceptions.  The defense was guided by linebacker Troy Brown.  Brown was only a sophomore, but that did not stop him from leading the team in tackles with 90.  The program will have to overcome the loss of defensive lineman Sean Adesanya.  Adesanya led the team in sacks with 7.  Montrae Braswell registered 10 pass break ups and 1 interception as a freshman. Alonzo McCoy had a team leading 3 interceptions that was tied with Brown.  McCoy enters his senior season during 2020.

Let us take a look at the Central Michigan schedule for the 2020 season.

The Chippewas open the season with four straight non-conferences matchups.  The first game is a clash against Mountain West member San Jose State at home.  Central Michigan will then hit the road for back to back games against Big Ten members (Nebraska & Northwestern). Central Michigan returns home to play host to Bryant, before MAC play starts.

The projected win total is set at 6 wins. At worst Central Michigan should be 2-2 in  non-conference play.  However, Northwestern has seen their fair share of struggles recently.  It would not be surprising to see the Chippewas steal a road win at Northwestern.  Looking into the MAC schedule, Central Michigan has some favorable road matchups.  Central Michigan plays on the road at Eastern Michigan and Toledo.  Both teams finished the 2019 season with a losing record, while Eastern Michigan will be transitioning quarterbacks.  At least 2 wins in non-conference play, plus 2 road wins here, would leave just 2 wins needed to at least push for an over.

Coach Jim McElwain and company have 4 home games in conference play.  Central Michigan returns nearly their whole offense from a season ago.  Seeing how much talent the Chippewas return on offense, this program should secure at least 2 home wins.  Therefore, I’m going to side with the over, as Central Michigan should be the team to beat again in the MAC West.