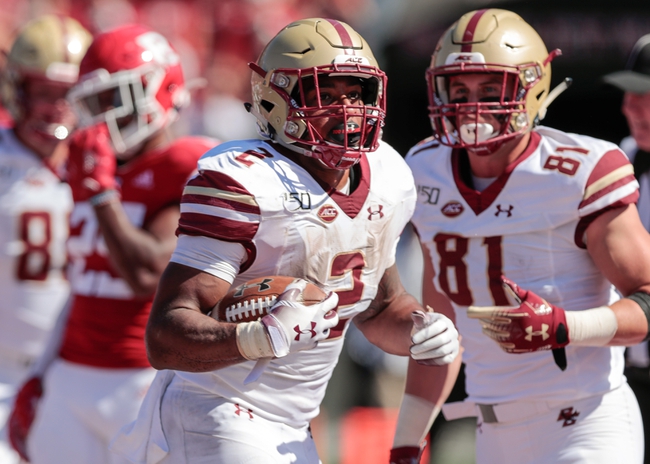 The Boston College Eagles will be looking to improve off of a 2019 season that saw them finish the season with a 32 point loss in the Ticketmaster Birmingham  Bowl.  Boston College finished the 2019 season with an overall record of (6-7) and a (4-4) record in ACC play.  The offense averaged 29 points per game, which ranked 66th at the FBS level.  The defense was generous throughout the season, allowing an average of 32.2 points per contest, which ranked in the bottom 30 of the country.  The program is under the direction of Jeff Hafley.  Hafley takes over for Steve Addazio.

The offense had two quarterbacks that split the season under center.  Anthony Brown saw the majority of the time, passing for 1,250 yards, throwing 9 touchdowns and 2 interceptions.  However, Brown has since transferred to Oregon.  Dennis Grosel was the other quarterback that saw playing time, passing for 983 yards, 9 touchdowns, and 3 interceptions.  Grosel will be entering his junior season and should be quarterback for the 2020 season.  The offense will have to adapt, as running back AJ Dillon was drafted in the 2nd round by the Green Bay Packers.  Dillon rushed for 1,685 yards and 14 touchdowns.  The good news for Boston College is, David Bailey saw a considerable amount of playing time as a sophomore.  Bailey rushed for 844 yards and 7 touchdowns.  Tight end Hunter Long returns for a junior season, after hauling in 28 receptions for 509 yards and 2 scores.

As a team the defense totaled 19 sacks and 10 interceptions.  The defense was led by linebacker Max Richardson.  Richardson had a team high 108 tackles as a junior, while also having a team lead in 3.5 sacks.  He will be back for the 2020 campaign.  Defensive back Brandon Sebastian recorded 9 pass break ups and 1 interception.  Mike Palmer added 3 pass break ups and 2 interceptions in the secondary.  Both defensive backs will be back for the 2020 season.

Let us take a look at the Boston College schedule for the 2020 season.

The Eagles open the 2020 season with a conference game at home against Syracuse.  Boston College will then have three straight non-conference games, those slate of games feature: Ohio, at Kansas, and Purdue.  The last out of conference game is a home contest against Holy Cross later in the season.

The projected win total is set at 4 wins.  Boston College has a rather easy schedule for non-conference games.  Boston College will be ready for a redemption game at Kansas this season.  The Eagles should open the season with a win at home against Syracuse, before out of conference games start. The program returns a quarterback that had plenty of action last season and a running back that rushed for almost 850 yards, while being handcuffed behind Dillon.  The offense will also have 3 seniors on the offensive line.  While the defense wasn’t stellar last season, a few key players do return. I think this win total is pretty low, as Boston College should be participating in a bowl game in 2020.  I’m taking the over for Boston College in 2020.