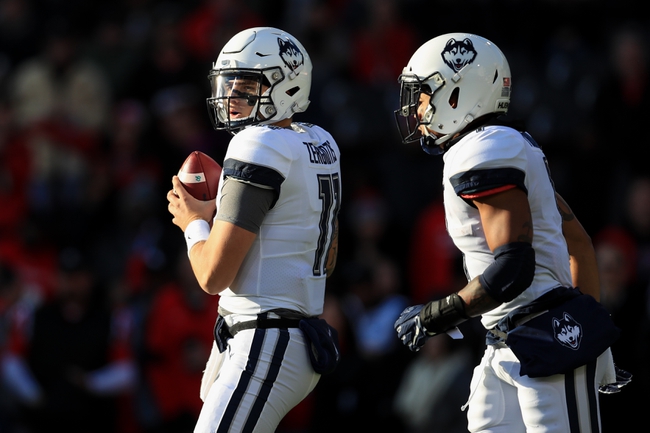 The UConn Huskies will be hoping to see an improvement for the program during the 2020 season.  UConn finished the 2019 season with an overall record of (2-10), while going (0-8) in AAC play.  However, UConn for the 2020 season has an independent schedule.  The offense during 2019 averaged 18.9 points per game, which ranked 120th out of 130 teams.  The defense was nothing to write home about, as the defense allowed over 40 points per contest.  The program is under the direction of Randy Edsall.

The offense saw three different quarterbacks attempt at least 38 passes a season ago.  Quarterback Jack Zergiotis controlled the majority of snaps under center.  Zergiotis passed for 1,782 yards, 9 touchdowns, and 11 interceptions.  He was a freshman during the 2019 campaign.  The backfield does return a bright spot, as Kevin Mensah is back for a senior season.  Mensah rushed for over 1,000 yards and 9 touchdowns.  Wideout Cameron Ross guided the receiving core with 60 receptions for 723 yards and 4 touchdowns as a freshman.

As a team the defense registered 19 sacks and forced just 14 turnovers.  The defense recorded 7 interceptions and had 7 fumble recoveries.  The defense was led by defensive back Tyler Coyle.  Coyle Recorded 86 tackles, while having 10 pass break ups.  Lwal Uguak recorded a team high in sacks with 4, while adding 19 tackles.  Diamond Harrell contributed 2 interceptions in the secondary as a junior.

Let us take a look at the UConn schedule for the 2020 season.

The Huskies have put together a good mixture of games, in hopes to bring some excitement back to this program.  Fans have shown disinterest in watching some of the American Athletic opponents.  UConn will be looking to open the season with a win against UMass at home.  UMass has had about as many struggles as UConn has had in recent seasons.

The projected win total is set at 2.5 wins.  The Huskies have 5 matchups with members from power 5 conferences, with one of those being at home (Indiana).  This program is in dark times and this schedule doesn’t shake up to look like it will help their cause.  The only other possible wins on this schedule is a home game against Old Dominion who went (1-11) a season ago and Maine who is a FCS member.  However, Maine has had a solid program at the FCS level and this game can’t be overlooked.  UConn would have to win all three of these games to cover the win total, but seeing where this program is at, that is anything but a sure thing.  I’m going to side with the under, as another 2 win season at best seems more realistic.