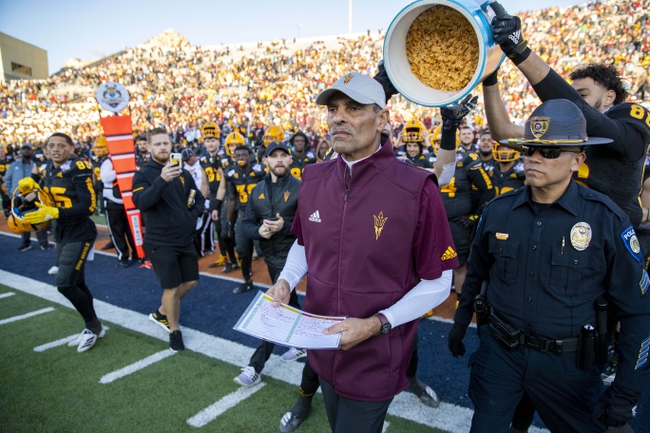 The Arizona State Sun Devils will be looking to build off of a 2019 season.  The program was able to end the season with a victory in the Tony The Tiger Sun Bowl.  Arizona State finished the 2019 season with an overall record of (8-5), while finishing Pac-12 play with a (4-5) record.  The offense averaged 24.8 points per contest, which ranked 96th at the FBS level.  The defense allowed an average of 22.4, which was in the top third for fewest points allowed.  The program is under the direction of Herm Edwards.

The offense was paced by freshman quarterback Jayden Daniels.  Daniels passed for 2,943 yards, 17 touchdowns, and 2 interceptions.  He also added 3 rushing touchdowns.  The backfield was guided by Eno Benjamin.  Benjamin rushed for 1,083 yards and 10 touchdowns.  The coaching staff will have to overcome the loss of Benjamin to the professional ranks.  The backfield will be a question mark, as the next highest candidate in rushing yards had just 50 yards.  Arizona State saw their top wideout Brandon Aiyuk get drafted in the 1st round by the San Francisco 49ers.  Aiyuk hauled in 65 receptions for 1,192 yards and 8 touchdowns.  Frank Darby looks to pick some of that slack, as the incoming senior reeled in 31 receptions for 616 yards and 8 touchdowns.

As a team the defense totaled 26 sacks and forced 28 turnovers.  The defense was led by linebacker Darien Butler.  Butler had a team high 88 tackles as a sophomore.  Defensive lineman Jermayne Lole led the defense in sacks with 6.5 as a sophomore.  The secondary was guided by junior Jack Jones.  Jones recorded 13 pass break ups and 3 interceptions.  Safety Aashari Crosswell contributed 10 pass break ups and 2 interceptions.

Let us take a look at the Arizona State schedule for the 2020 season.

The projected win total is set at 7.5 wins.  The Sun Devils will be looking to start the season 3-0, as their non-conference schedule is by no means brutal.  The offense lost their starting running back and top wideout.  It is uncertain who will step up and take the majority of playing time in the backfield in place of Eno Benjamin.  The good news for Herm Edwards and company is most defenses in the Pac-12 struggled to stop anybody.  While most defenses struggled in the conference, Arizona State had a plus defense and the program returns their key players on defense.

I’m going to side with the under here, as Arizona State lost their 2 key skill players from last season.  While the defense should still be stout, the inability to score at a consistent rate could cost Arizona State a win and fall 1 win short of the over.  A 7-5 season is realistic with a 1 win regression, but still able to do enough to participate in a bowl game.