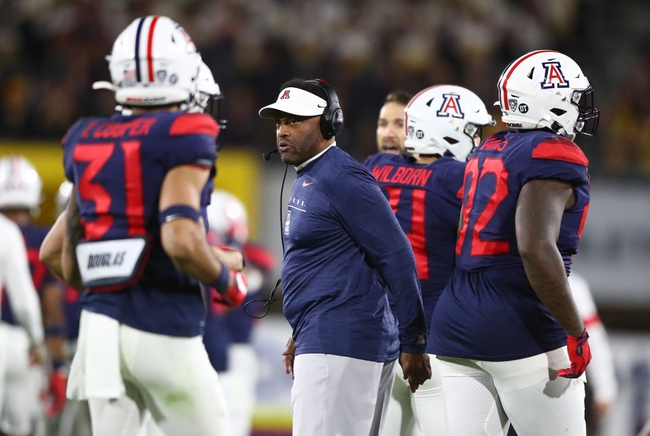 The Arizona Wildcats will be looking to improve off of their 2019 finish in the Pac-12.  Arizona finished in the cellar in the Pac-12 South.  Arizona finished the 2019 season with an overall record of (4-8), while going (2-7) in Pac-12 play.  The offense averaged 26.9 points per contest, which ranked 77th at the FBS level.  The defense allowed nearly 36 points per game, which ranked near the bottom.  The program is under the direction of Kevin Sumlin.

The offense used two quarterbacks during the 2019 season. Grant Gunnell will be under center for the 2020 season.  Gunnell passed for 1,239 yards, while throwing 9 touchdowns and 1 interception as a freshman.  The backfield was controlled by J.J. Taylor.  Taylor rushed for 721 yards and 5 touchdowns, but he was picked up by the New England Patriots as an un drafted free agent.  Wideout Jamarye Joiner is back for the 2020 season, after hauling in 34 receptions for 552 yards and 5 touchdowns.  Joiner was also a freshman, as his receiving yards were a team high.

As a team the defense totaled 17 sacks and 11 interceptions.  The defense was guided by linebacker Colin Schooler.  Schooler had a team high 98 tackles, while also adding 1.5 sacks.  Defensive back Lorenzo Burns paced the secondary with 7 pass break ups and 4 interceptions.  He returns for the program, as the 2020 season will be his senior year. Arizona didn’t have a great pass rush, but Jalen Harris did his part.  Harris had a team high 4 sacks as a junior.  The defense will need to be better at turning opposing teams over, as the Wildcats forced just 15 turnovers.

Let us take a look at the Arizona schedule for the 2020 season.

Arizona opens their season with a home contest against Hawaii, before welcoming Portland State.  The last non-conference game is a matchup at Texas Tech during week 4. The Pac-12 was continuously inconsistent during the 2019 campaign, except for Oregon and Utah.

The projected win total is set at 5 wins.  The Wildcats should be 2-0 to start the season, before taking 2 straight losses heading to UCLA.  Arizona doesn’t have a well rounded offense, as the no receiver had more than 552 yards receiving.  The program was torched on defense and seeing that the Pac-12 likes to put up points in a hurry, I’m going to take the under, as I just don’t see the offense being able to keep up.