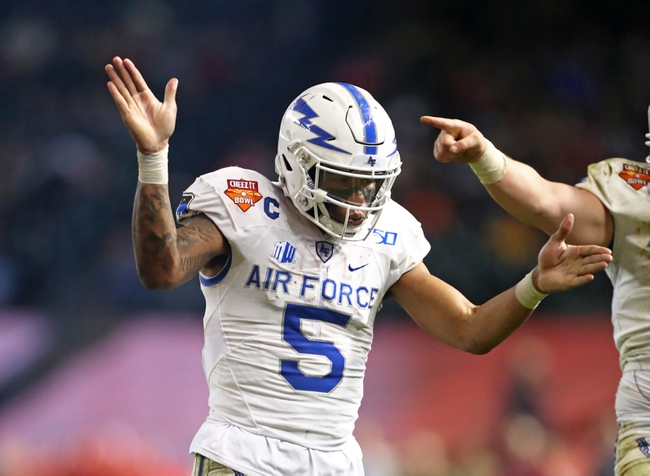 The Air Force Falcons will be looking to mirror their success from the 2019 campaign.  Air Force finished the 2019 season with an overall record of (11-2), while going (7-1) in Mountain West play.  The program was ranked 22nd at the end of the season.  The offense averaged 34.1 points per contest,which ranked 21st at the FBS level.  The defense was stout on the season, holding opponents to less than 20 points per game.  The program is under the direction of Troy Calhoun.

The offense was guided by junior quarterback Donald Hammond III.  Hammond passed for 1,316 yards, 13 touchdowns, and 6 interceptions.  The dual threat quarterback rushed for over 550 yards and 13 touchdowns.  The run first offense had 3 players rush for more than 740 yards on the season.  Kadin Remsberg led the backfield with 1,050 yards and 8 touchdowns as a junior.  The offense will have to replace wideout Geraud Sanders.  Sanders reeled in 30 receptions for 746 yards and 7 touchdowns. Benjamin Waters was also a senior.  He hauled in 22 receptions for 658 yards and 7 touchdowns.  The player with the most receiving yards that is  returning, had just 25 yards receiving.

As a team the defense collected 27 sacks and 7 interceptions, while forcing 12 fumbles.  The defense was led by linebacker Demonte Meeks.  Meeks totaled a team leading 98 tackles, while recording 4 sacks.  The defensive line was paced by Mosese Fifita.  Fifita had a team high 6 sacks, but was a senior during the 2019 season.  The secondary was guided by Zane Lewis.  Lewis was picked up by the Arizona Cardinals as an undrafted free agent.  The defensive back had 15 pass break ups and 1 interception a season ago.  Air Force will have to overcome the loss of their secondary.  The top four defensive backs from the 2019 campaign were all seniors.

Let us take a look at the Air Force schedule for the 2020 season.

The Falcons open the season with a home non-conference contest against Duquesne.  The rest of the non-conference slate features road games at Purdue and Army, while also playing host to Navy.

The projected win total is set at 7.5 wins.  Air Force has a real chance of going 3-1 in non-conference play, with the lone loss being at Purdue.  However, the game at Army will be tough, but a win would not be out of the realm.  A regression in wins is almost guaranteed, as the Falcons lost quite a bit from their stout defense from the 2019 campaign.  Air Force also does not have much experience returning in the receiving core.  Although since this is a run first offense, the lack of experience from the wideout won’t be a huge issue.

Air Force should be able to secure conference wins over: Fresno State, San Jose State, Hawaii, Colorado State, and New Mexico.  Those conference wins plus the solid chance of 3 out of conference wins, would put Air Force at 8 wins.  I’m going to take the over, but the team will regress in wins from last season, as this defense will not have the same playmakers to rely on.