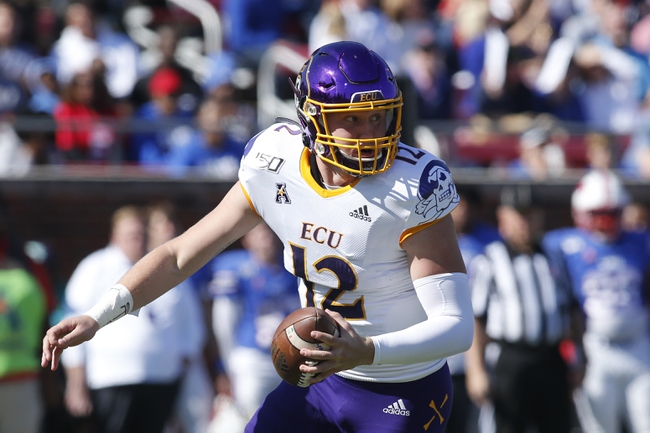 The East Carolina Pirates will be looking to move higher up the American Athletic Conference standings, after seeing a 5th place finish on the East side during 2019.  East Carolina finished the 2019 season with an overall record of (4-8), while going (1-7) in AAC play.  The offense averaged 26.8 points per contest, which ranked 78th at the FBS level.  The defense allowed an average of 33.7, which ranked near the bottom out of 130 teams.  The head coach is Mike Houston.

The offense was guided by sophomore quarterback Holton Ahlers.  Ahlers passed for 3,387 yards, 21 touchdowns and 10 interceptions.  He will be back under center for his junior campaign.  The backfield looks to again  be led by DeMetrius Mauney.  Mauney rushed for nearly 450 yards and 1 score as a freshman.  C.J. Johnson had 908 yards receiving via 54 receptions and 4 touchdowns.  The wideout accomplished this as a freshman.  He will be looking to surpass the 1,000 yard mark during the 2020 season.

As a team the defense totaled 23 sacks and 11 interceptions.  The defense was led by linebacker Xavier Smith.  Smith collected 81 tackles for a team lead, while also forcing 1 fumble.  The linebacker returns for his junior year.  The defense will have to overcome the departure of Kendall Futrell.  Futrell contributed 11 sacks and 63 tackles.  The secondary was guided by Davondre Robinson.  Robinson recorded 3 interceptions and 4 pass break ups, while also adding 71 tackles.  The defensive back will be a senior during the 2020 campaign.

Let us take a look at the East Carolina schedule for the 2020 season.

The projected win total is set at 4 wins.  East Carolina has a tough AAC slate of games for the 2020 season.  East Carolina has to face 4 of the 5 teams that had 10 wins or more during the 2019 campaign, while also playing an 8 win Temple team on the road.  East Carolina was not great on defense a season ago and will need to improve in order to cover this total. The program returns their offensive playmakers from the 2019 season, which is a plus.  However, there are some toss up games on this schedule, like Marshall Georgia State, and Tulane.  The defense will have to overcome the majority of their pass rush coming from Futrell.  I’m going to side with the under, as the defense will need to improve a ton in order to cash this over.