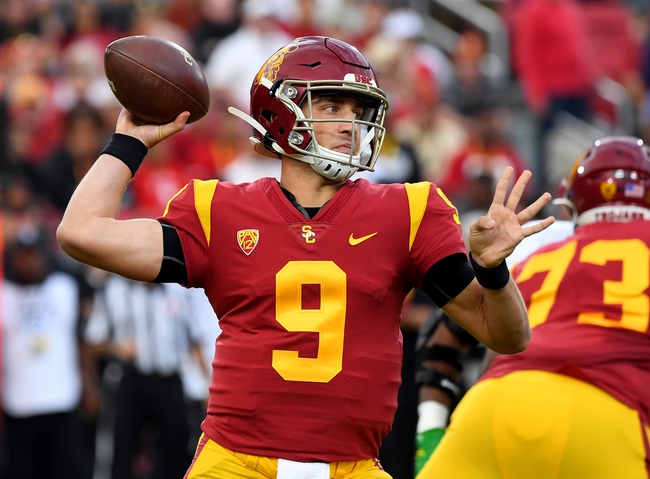 The USC Trojans are looking to build off of a 2nd place finish in the Pac-12 South.  USC finished the 2019 season with an overall record of (8-5), while going (7-2) in the Pac-12.  The offense averaged 32.5 points per contest, which ranked 37th at the FBS level.  The defense was in the bottom of half in points allowed, giving up an average of 29.4.  The program is under the direction of Clay Helton.

The offense is paced by sophomore quarterback Kedon Slovis.  Slovis passed for 3,502 yards, 30 touchdowns, and 9 interceptions as a freshman.  He was one of three quarterbacks that saw time last season.  The backfield is led by senior running back Vavae Malepeai.  Malepeai rushed for over 500 yards and 6 touchdowns as a junior.  Stephen Carr added 5 rushing scores, while splitting time with Malepeai.  The receiving core is where USC lost a key piece.  Michael Pittman Jr. hauled in over 100 receptions for 1,275 yards and 11 touchdowns.  Pittman’s contributions were good enough to land him as a 2nd round draft pick.  However, USC still has two excellent  options that return.  Amon-Ra St. Brown is back for a junior season.  St. Brown reeled in 77 receptions for 1,042 yards and 6 touchdowns.  Tyler Vaughns added 912 yards receiving and 6 touchdowns.

As a team the defense totaled 35 sacks and 9 interceptions.  The defense was led by linebacker John Houston Jr.  Houston led the team in tackles with 104, while adding 2.5 sacks. USC will have to overcome his leadership, as he is now a part of the Pittsburgh Steelers.  Defensive lineman Drake Jackson led the team with 5.5 sacks as a freshman.  The secondary was guided by Isaiah Pola-Mao.  Pola-Mao registered 2 pass break ups and 4 interceptions as a sophomore.

Let us take a look at the USC schedule for the 2020 season.

The Trojans open the season with a tough non-conference opponent, as USC heads to a neutral site for SEC member Alabama.  The rest of the non-conference slate features New Mexico and Notre Dame, as both games are at home.

The projected win total is set at 9 wins.  I am high on the USC offense, as Slovis returns after throwing for over 3,500 yards, while the offense returns two receivers that had over 900 yards receiving.  USC also will have their whole secondary back, as the defensive backs saw plenty of experience as underclassmen.  I’m going to side with the under here, as a push seems like the best case scenario.  USC will still be good and should compete for the top spot in the South.  However, with road games at Utah and Oregon, plus a neutral site contest against Alabama, it will not be easy to get more than 9 wins.