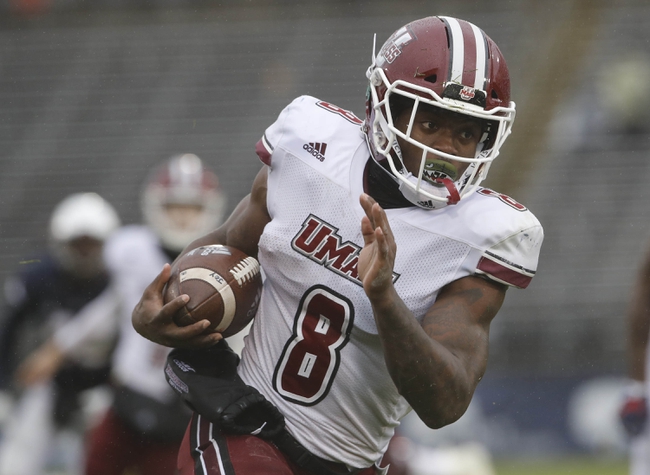 The UMass Minutemen are looking to turn the tides in recent seasons.  UMass finished the 2019 season with an overall record of just (1-11).  UMass is an independent program, therefore does not have a conference record.  The program did go (0-3) against other independent schools.  The offense struggled to light up the scoreboard, averaging just 19.8 points per game, which ranked 118th at the FBS level.  The defense was even worse, ranking dead last out of 130 teams in points allowed (52.7).  The program is under the direction of Walt Bell.

The offense saw 4 different quarterbacks attempt a pass during the 2019 campaign.  UMass was guided at the quarterback position by Randall West.  West passed for 864 yards, while throwing 6 touchdowns and 6 interceptions, but did add 2 rushing scores.  However, West ran out of eligibility.  Andrew Brito looks to take over for a full season under center.  Brito passed for 830 yards, while throwing 7 touchdowns and 6 picks a season ago.  Running back Bilal Ally returns for his senior season.  Ally paced the backfield with 853 yards rushing and 7 touchdowns.  Zak Simon led the UMass offense in receiving yards with 355.  Tight End Kyle Horn contributed 3 receiving touchdowns.

As a team the defense recorded 12 sacks and 10 interceptions.  The defense did not have a lot of strength, as UMass gave up the most points on a rather consistent basis in all of the FBS.  Linebacker Cole McCubrey led the defense in tackles with 84 as a junior.  Linebacker Chinedu Ogbonna registered 2 sacks, which was a team lead.  The secondary did have a bright spot in Isaiah Rodgers.  Rodgers had 4 interceptions and 9 pass break ups, but is now part of the Indianapolis Colts organization.  Massachusetts will need to overcome the loss of Rodgers and will need to improve drastically on defense.

Let us take a look at the UMass schedule for the 2020 season.

The Minutemen saw their lone win come against Akron last season.  UMass will travel to Akron this season on October 17th.  Massachusetts has more than a fair share of equal opponents or teams that struggled as well during the 2019 season, that are on the schedule for the 2020 season.  UMass will hit the road for games against UConn, New Mexico, and Akron, while playing host to New Mexico State.  These 4 schools had a combined record of 6-42.  The Minutemen will also play host to FCS member Albany.

The projected win total is set at 1.5 wins.  UMass has plenty of chances to snag 2 wins and improve from the 2019 campaign.  Massachusetts returns a quarterback and running back that both saw plenty of time during the 2019 season.  With a slight improvement on defense, there is no reason why UMass can’t capture at least 2 wins during the 2020 season.  I’m taking the over as head coach Walt Bell should be able to improve the record form the 2019 season.