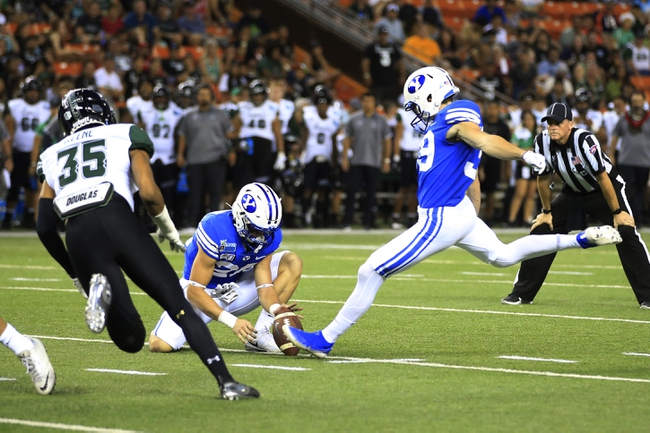 The BYU Cougars will be looking to improve off of a (7-6) record from the 2019 season.  BYU plays a mixture of competition, due to being an independent school.  The offense averaged 28.5 points per contest, which ranked 67th at the FBS level.  The defense allowed an average of 25.5 points per game.  The program is under the direction of Kalani Sitake.

The offense was guided by sophomore quarterback Zach Wilson.  Wilson passed for 2,382 yards, 11 touchdowns, and 9 interceptions.  Running back Sione Finau rushed for 359 yards and 2 touchdowns.  He led the backfield as a freshman.  Tight end Matt Bushman returns for his senior season.  The tight end hauled in 47 receptions for a team lead in receiving yards.  Bushman collected 688 yards receiving and 4 touchdowns.  The offense will have to overcome Micah Simon’s contributions.  Simon was a senior last year and reeled in 51 receptions for 616 yards.

Let us take a look at the BYU schedule for the 2020 season.

The Cougars will play a variety of teams.  Their schedule features teams from the Pac-12, Big Ten, Mountain West, SEC, AAC, and more.  Their schedule is highlighted with home contests against Michigan State and Missouri.  BYU will also hit the road for games against Utah, Minnesota, and Boise State.

The projected win total is set at 6.5 wins.  Looking at the BYU schedule, the Cougars should be able to take care of business at home against Michigan State, Utah State, and North Alabama.  A Road win at Northern Illinois is likely.

The BYU program has more than two 50/50 games.  The games that should be brought to light are the  home games against Houston, Missouri, and San Diego State.  These three games will be key, as BYU will more than likely have at least 5 road losses  (Utah, Arizona State, Minnesota  Boise State, and Stanford).  These three games are key for this win total, as the Cougars should be 4-5 outside of these three games.

Missouri should be improved from last season under new head coach Eli Drinkwitz.  The one plus for BYU in this matchup is it’s at home.  However, Missouri is an SEC team and this is one of those games that Missouri will be expected to win, if the Tigers want to compete in the SEC, even though this would be a non-conference opponent.  That loss in itself would put BYU under the win total.  BYU has a loaded schedule for the 2020 season and a 6-6 season at best seems appropriate.