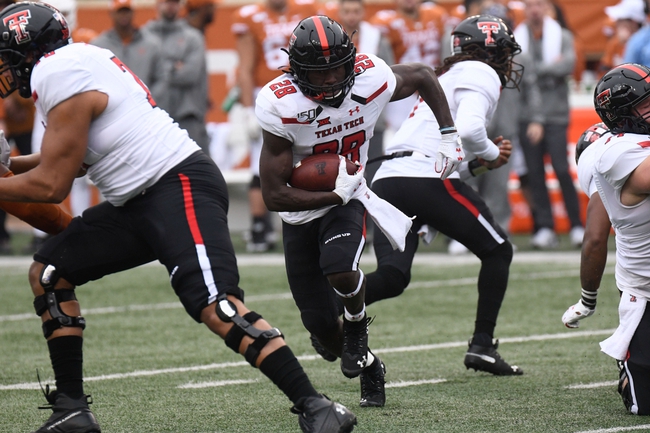 The Texas Tech Red Raiders will be looking to move up the Big 12 standings for the 2020 season.  Texas Tech finished the 2019 season with an overall record of (4-8), while going (2-7) in Big 12 play.  The offense averaged 30.5 points per game, which ranked 53rd at the FBS level. The defense allowed an average of 30.3 per contest.  The head coach is Matt Wells.

The offense is guided by quarterback Jeff Duffey.  Duffey passed for 2,840 yards, 18 touchdowns and 5 interceptions as a junior.  The backfield was paced by freshman running back SaRodorick Thompson.  Thompson rushed for 765 yards and 12 touchdowns.  The receiving core was led by Erik Ezukanma.  Ezukanma collected 6664 receiving yards on 42 receptions and 4 touchdowns.

As a team the defense totaled 24 sacks and 14 interceptions.  The defense was guided by linebacker Jordyn Brooks.  Brooks registered 108 tackles and 3 sacks, which led to him being drafted by the Seattle Seahawks.  Defensive lineman Eli Howard led the team in sacks with 5.  He returns for a senior season.  The secondary will have to overcome the contributions that defensive back Douglas Coleman III made.  Coleman recorded 8 interceptions and had 2 pass break ups, which landed him on the Denver Broncos roster.  DaMarcus Fields returns for a senior season and will be roaming in the secondary.  Fields had 3 interceptions as a junior.

Let us take a look at the Texas Tech schedule for the 2020 season.

The projected win total is set at 5.5 wins.  Texas Tech should have 3 wins heading into conference play, which would mean just 3 wins are needed to cover the over.  When you look at the conference slate, there are a few teams that stick out as for sure wins.  Texas Tech hosts Kansas and plays on the road at TCU.  Those are two games that are very winnable.  TCU finished the 2019 season with a losing record, but lost quite a few key players to the NFL Draft.  TCU looks to have a down season for back to back seasons.  I’m going to side with the over, as Texas Tech also has a great chance to upend West Virginia at home.  A win over West Virginia would give the Red Raiders 6 wins when you combine the other winnable matchups.  Texas Tech struggles again in Big 12 play, but does just enough to make a bowl game due to returning offensive skill players.