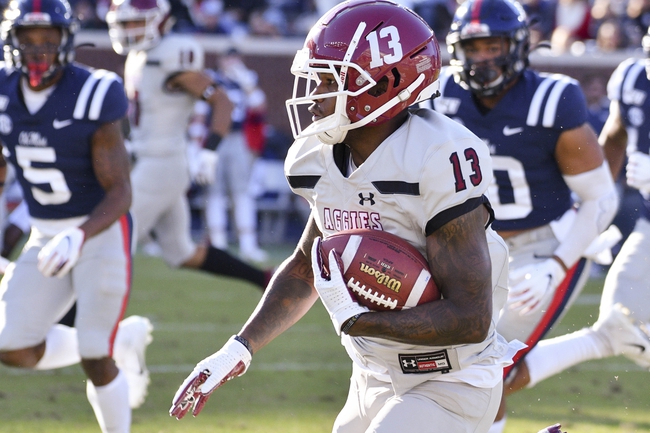 The New Mexico State Aggies will be looking to have higher expectations then their 2019 record suggests.  New Mexico State finished the 2019 season with an overall record of (2-10), while going (0-2) against other Independent programs.  The offense averaged just 21.7 points per contest, which ranked 109th.  The defense was abysmal, ranking 129th out of 130 teams at the FBS level in points allowed.  The defense allowed 41 points per game.  The program is under the direction of Doug Martin.

The offense is paced by quarterback Josh Adkins.  Adkins passed for 2,588 yards, 14 touchdowns, and 15 interceptions as a sophomore.  One of the bright spots from last year's team was running back Jason Huntley.  Huntley rushed for pver 1,000 yards and had 9 touchdowns.  However, Huntley was drafted by the Detroit Lions.  Wideout Tony Nicholson hauled in 60 receptions and 644 yards and 6 touchdowns.  However, Nicholson was a senior during the 2019 season.  The offense lost their top 3 wideouts from the 2019 campaign.

As a team the defense collected 15 sacks and had 5 interceptions.  The defense was guided by linebacker Javahn Fergurson.  Fergurson collected 133 tackles, but was a senior least season.  Xander Yarberough led the team in sacks with 3.  As a team the program had 27 seniors, there will be more than plenty voids to fill.

Let us take a look at the New Mexico State schedule for the 2020 season.

The Aggies had just 2 wins last season, while having 27 seniors on the roster.  It is clear this program will need to fill plenty of gaps left by seniors.  New Mexico State has some winnable games on the schedule.  The program plays Akron, New Mexico, UTEP, UMass, and Texas Southern.

The projected win total is set at 4 wins.  These 5 teams mentioned above, combined for a 2019 record of 4-55.  Yes, 4 wins and 55 losses.  This win total is projected 2 wins higher than last season’s amount of wins.  However, I am still not confident this team gets 4 wins, with the 2019 team having 27 seniors.  The team lost their starting running back and their top 3 wide receivers.  New Mexico had 2 wins last season and 1 of them was against the Aggies.  I’m not sold on this Aggies team, therefore I’m taking the under here.  A push is probably realistic, but seeing how many voids this team has to fill, I’m taking the under, even with 5 winnable games.