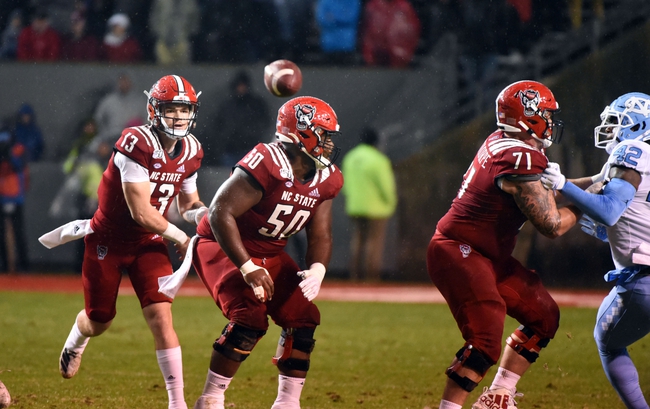 The NC State Wolfpack will be looking to improve off of a disappointing 2019 season.  NC State finished the 2019 season with an overall record of (4-8), while going (1-7) in ACC play.  The offense averaged just 22.1 points per contest, which ranked 107th at the FBS level.  The defense allowed over 30 points per game.  The program is under the direction of Dave Doeren.

The team used three different quarterbacks last season.  The offense was primarily led by freshman quarterback Devin Leary.  Leary passed for 1,219 yards, while throwing 8 touchdowns and 5 interceptions.  Running back Zonovan Knight rushed for 745 yards and 5 touchdowns as a freshman.  Emeka Emezie led the wideouts in yards, hauling in 56 receptions for 576 yards and 2 touchdowns.  The wideout will be back for his senior season.

As a team the defense totaled 35 sacks and 4 interceptions.  The defense was led by sophomore Safety Tanner Ingle.  Ingle registered 69 tackles and had 4 pass break ups.  Defensive tackle Alim McNeill collected 5.5 sacks, which was a team lead for the Wolfpack.  NC State was led in the secondary by freshman cornerback Malik Dunlap.  Dunlap registered 8 pass break ups, while collecting 20 tackles.

Let us take a look at the NC State schedule for the 2020 season.

The projected win total is set at 5.5 wins.  NC State returns the majority of their talent, as a lot of guys saw great experience as freshman or sophomores a season ago.  However, NC State will more than likely start the season 0-2. The program should get back on track with back to back wins over Troy and Delaware.  NC State has a rather easy schedule inside ACC play.  While North Carolina State struggled last season, an improvement in wins looks to be on the doorstep.

NC State should be 3-3 heading into a game at Clemson, which will end in a loss.  I'm going to take the over here, as I like the chances of NC State to be a participant in a bowl game.  North Carolina State has an above average chance to secure wins at home against: Wake Forest, Boston College, and Liberty.  Those 3 wins, plus wins over Troy, Delaware, and Duke would put NC State over.  The Wolfpack have a lot of returning talent and I like for the youngsters to improve off of their first season as starters from the 2019 campaign.