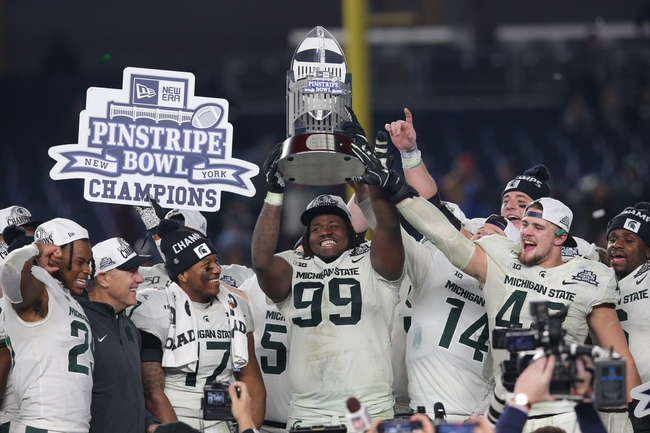 The Michigan State Spartans will be looking to build off of a 2019 season that saw the team participate in the New Era Pinstripe Bowl.  Michigan State finished the 2019 campaign with an overall record of (7-6), while going (4-5) in Big Ten play.  The offense averaged 22.4 points per game, which ranked 105th at the FBS level.  The defense was a lot better, ranking 39th in points allowed, giving up 22.5 per contest. The program is under the direction of Mel Tucker.  Tucker takes over for previous head coach, Mark Dantonio.

The offense was guided by quarterback Brian Lewerke.  Lewerke passed for 3,079 yards and 17 touchdowns, while throwing 13 interceptions.  The quarterback signed as an undrafted free agent with the New England Patriots.  Junior quarterback Rocky Lombardi looks to be in line to compete for the starting job. Running back Elijah Collins rushed for 988 yards and 5 touchdowns as a freshman last season.  The offense will have to replace wideout Cody White.  White who is now a member of the Kansas City Chiefs, reeled in 66 receptions for 922 yards and 6 touchdowns.  Wideout Darrell Stewart Jr. has also moved on to the NFL.

As a team the defense collected 40 sacks and 12 interceptions.  The defense was led by junior linebacker Antjuan Simmons.  Simmons recorded 90 tackles and 3.5 sacks.  The best pass rusher from a season ago was drafted in the 7th round by the Minnesota Vikings.  Defensive end Kenny Willekes collected 10.5 sacks, to help his draft stock. Cornerback Josiah Scott paced the secondary with 3 interceptions and 7 pass break ups, but he was also taken in the NFL draft.  Safety Xavier Henderson looks to be a big part of the defense, as he returns for a junior season.  He posted 83 tackles, 2 interceptions, and 6 pass break ups, a season ago.

Let us take a look at the Michigan State schedule for the 2020 season.

The projected win total is set at 6 wins.  Michigan State looks to regress in wins from a season ago, as the team lost quite a few players to the draft.  The offense lost both their leading wideouts, as well as multiple key players from a stout defense from last year. Michigan State has three tough conference games in a row after the non-conference slate, which all three could very well be losses.  I’m going to side with the under here, as the only other conference games that look like wins would be a home game against Rutgers and a road game at Maryland. Those two wins should give Michigan State 4 wins, plus a toss up game against Miami. Let’s say the Spartans beat Miami, well that still leaves Michigan State short of 6 wins.  The program could surprise and snag a win where they shouldn't, but even still that would just be a push.  The under seems like a safe bet for a team that lost numerous players to the NFL.