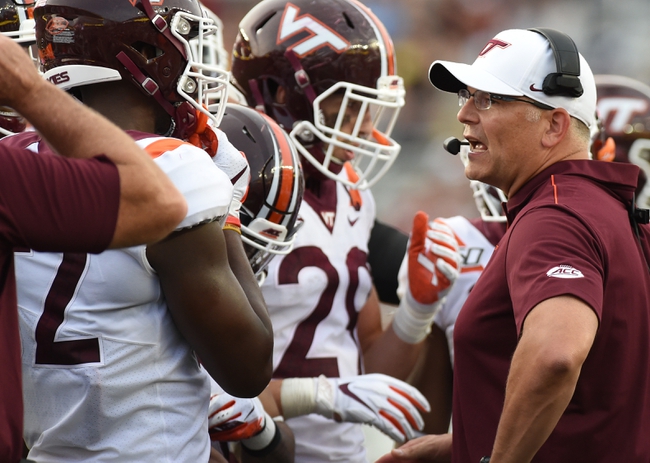 The Virginia Tech Hokies will be looking to build off of a 2019 season that saw the program participate in a bowl game.  Virginia Tech finished the 2019 season with a record of (8-5), while going (5-3) in ACC play.  The offense averaged 30.8 points per game, which ranked 49th at the FBS level.  The defense allowed an average of 24.7 points per game, which ranked in the top 50.  The program is under the direction of Justin Fuente.

As a team the defense collected 38 sacks and 14 interceptions.  The defense was led by linebacker Rayshard Asby.  Asby registered 119 tackles and 5 sacks.  Defensive back Chamarri Conner led the team in sacks with 5.5, while having 8 pass break ups, and 68 tackles as a sophomore.  Caleb Farley led the secondary in interceptions with 4, while also adding 12 passes defended.

Let us take a look at the Virginia Tech schedule for the 2020 season.

The Hokies open the season with four straight non-conference matchups.  Virginia Tech plays host to Liberty, Penn State, and North Alabama.  The only road contest in the non-conference slate is a matchup against Middle Tennessee State.

The projected win total is set at 8.5 wins.  The Hokies have a lot of talent returning from an 8 win tea from a season ago.  Virginia Tech should be 3-1 in non-conference play at worst.  Virginia Tech opens conference play with a rather easy stretch.  The Hokies will host Georgia Tech, Boston College, while traveling to North Carolina.  Virginia should have an above average chance to start the season 6-1.  Coach Fuente’s team also plays host to Miami, while hitting the road for a game at Duke.  Both of these games are very winnable for the Hokies.  I look for Virginia Tech to have 8 wins heading into a season finale against Virginia at home.  I’ll side with the over, as I like for Virginia Tech to win a home game against Virginia and end the season with 9 wins.