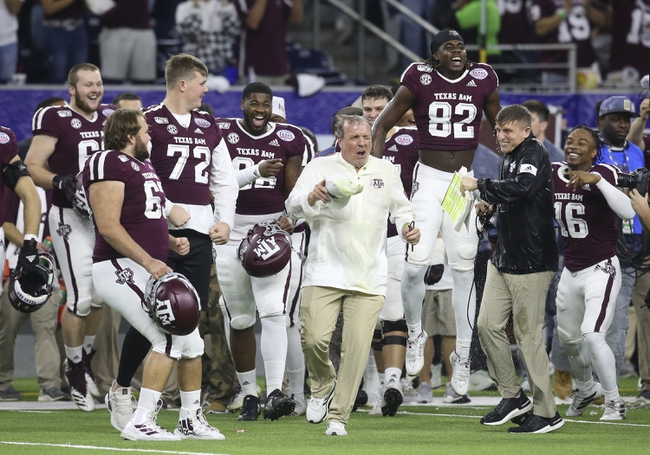 The Texas A&M Aggies will be looking to build off of a 2019 campaign that saw the program secure a win in the Academy Sports + Outdoors Texas Bowl against Oklahoma State.  Texas A&M finished the 2019 season with an overall record of (8-5), while going (4-4) in SEC play.  The offense averaged 29.5 points per contest, which ranked 62nd at the FBS level.  The defense was rather solid, only allowing an average of 22.5 points per game.  The head coach is Jimbo Fisher.

The offense was guided by quarterback Kellen Mond.  Mond passed for 2,897 yards, while throwing 20 touchdowns and 9 interceptions.  The quarterback added 8 rushing touchdowns.  Running back Isaiah Spiller had a successful season as a freshman.  The freshman running back rushed for 946 yards and 10 touchdowns. Wideout Jhamon Ausbon reeled in 66 receptions for 872 yards and 5 touchdowns.  The offense did lose wideout Quartney Davis to the Minnesota Vikings.

As a team the defense totaled 29 sacks and 10 interceptions.  The defense was led by linebacker Buddy Johnson.  Johnson collected 77 tackles and 1 sack. Johnson was a junior a season ago.  The defense was led in sacks by defensive tackle Justin Madubuike.  Madubuike recorded 5.5 sacks and will be hoping for the same success as a Baltimore Raven. Defensive back Myles Jones had 2 interceptions and 6 pass break ups as a junior.

Let us take a look at the Texas A&M schedule for the 2020 season.

The Aggies open the season with three straight non-conference games.  These games feature home contests against: Abilene Christian, North Texas, and Colorado. Texas A&M will be 3-0 heading into a home conference game against Arkansas.  Arkansas was the only team to not win a conference game in the SEC.  A 4-0 start for Texas A&M is almost a given, before hitting the road for an SEC game against Mississippi State. The Aggies have a lot of returning talent and should be able to snag a road win here, against a lesser opponent in Mississippi State.

The projected win total is set at 9.5 wins.  The Aggies have a great chance to start the season 5-0, before playing host to Fresno State for their final non-conference game.  Texas A&M should win by at least multiple scores against Fresno State, which will lead to a 6-0 start.  After the 6-0 start the schedule heats up for Texas A&M, as the Aggies have to face Auburn and Alabama on the road, as well as hosting LSU.  These are three of the last six games for Texas A&M.  The remaining schedule should be wins over South Carolina on the road, while winning at home against Ole Miss and Vanderbilt.

Texas A&M should have 9 wins heading into a season finale against LSU.  This game is at home and there could be a lot riding on this game.  Seeing that Texas A&M should be highly ranked in this game after being 9-2 heading into this game, I’m going to give the Aggies the home field advantage, which will lead to a nail biting win.  Therefore, I’m going to take the over, as Texas A&M has a real shot of 10 wins, while being highly ranked at the end of the season.