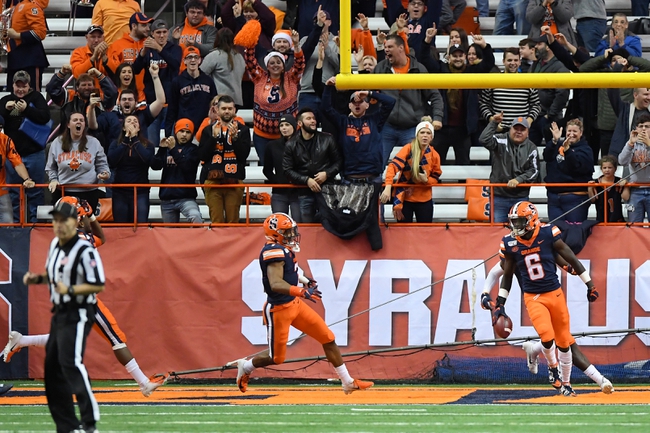 The Syracuse Orange will be looking to jump up the ACC Atlantic standings from a year ago.  Syracuse finished with an overall record of (5-7), while going (2-6) in ACC play.  The offense averaged 28.2 points per contest, which ranked 69th at the FBS level.  The defense ranked 88th in most points allowed, allowing 30.7 points per game.  The program is under the direction of Dino Babers.

The offense was guided by quarterback Tommy DeVito.  DeVito passed for 2,360 yards and 19 touchdowns, while throwing 5 interceptions as a sophomore.  Running back Jarveon Howard is the leading returner in rushing yards from a season ago.  Howard rushed for 337 yard and 3 touchdowns as a sophomore.  Starting running back Moe Neal totaled over 800 yards rushing, but was a senior. Howard is expected to see an increase in time out of the backfield.  The offense lost their star wideout in Trishton Jackson, as he was drafted during the 2020 NFL Draft.  Wideout Taj Harris hauled in 37 receptions for over 550 yards and 2 touchdowns as a sophomore. Tight End Aaron Hackett recorded 6 touchdowns, while having just 23 receptions on the year.  The program did land running back transfer Abdul Adams, as he comes from Oklahoma.

Let us take a look at the Syracuse schedule for the 2020 season.

Syracuse kicks off the season with a road conference game against Boston College. The Orange then have 3 straight non-conference games.  These games feature road games at Rutgers and Western Michigan, while playing a home game against Colgate.  The last out of conference game is a home contest against Liberty.  Syracuse returns their quarterback and players that saw quite a bit of playing time from a season ago.  While Rutgers did bring back head coach Greg Schiano, I still like the Orange to get a road win.  Syracuse will beat Colgate and Liberty, but a win at Western Michigan is a toss up.

The projected win total is slated at 6 wins.  Syracuse should be at least 3-1 in out of conference games.  Syracuse then has above average chances for wins at home against Georgia Tech, NC State, and Florida State.  Those 3 games would put Syracuse at 6 wins.  I’m going to take over here, with a push at worst, as the Orange do have a chance against Western Michigan on the road.