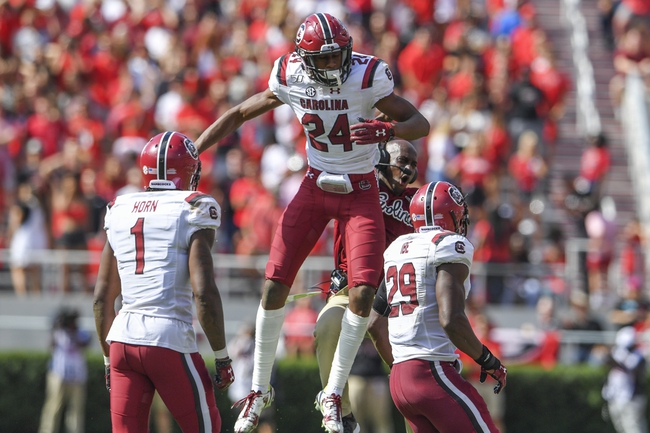 The South Carolina Gamecocks will be looking to get back on track during the 2020 season, after a 2019 season that saw a regression from 2018. South Carolina finished the 2019 season with an overall record of (4-8), while going (3-5) in SEC play.  The offense struggled to light up the scoreboard, ranking 104th in points per game.  The defense allowed an average of 26.1 points per contest, which ranked 53rd.  Will Muschamp is the head coach for the Gamecocks.

South Carolina was led on offense by freshman quarterback Ryan Hilinski.  Hilinski passed for 2,357 yards, while throwing 11 touchdowns and 5 interceptions.  South Carolina lost their top three running backs from a season ago.  Kevin Harris rushed for 179 yards and 4 touchdowns last season, the most by any returning running back.  He looks to have a chance as the starting running back position. Shi Smith hauled in 43 receptions for 489 yards and 2 touchdowns, as that is the most for a returning wideout.  OrTre Smith will look to up his production, due to the graduation of wideout Bryan Edwards.

As a team the defense totaled 24 sacks and 12 interceptions.  The defense was guided by sophomore linebacker Ernest Jones.  Jones recorded 97 tackles, 1 sack , and 2 interceptions.  Defensive tackle Javon Kinlaw recorded 6 sacks and was drafted by the 49ers during the 1st round of the 2020 draft.  Defensive end Aaron Sterling returns for a senior season, after registering 6 sacks and 40 tackles.  Junior defensive back Israel Mukuamu is coming off a sophomore season that saw him finish with 4 interceptions and 9 pass break ups.

Let us take a look at the South Carolina schedule for the 2020 season.

The projected win total is slated at 5.5 wins.  South Carolina has a tough road slate in the SEC and the only likely win will be at Vanderbilt.  The first SEC game for South Carolina is against Missouri.  Missouri will be an improved team from a year ago, under former Appalachian State head coach Eli Drinkwitz. The rest of the home schedule features, Tennessee, Texas A&M, and Georgia.  Texas A&M is expected to have an increase in wins from a year ago.  Georgia will be out for revenge, after falling to South Carolina last season.  The Gamecocks have an above average chance at home to snag a win against Tennessee.  The offense will need to fill the void that multiple playmakers left.  I just don’t see the offense bringing enough experience to improve on a 3-5 SEC record from the 2019 campaign.   South Carolina should see an additional win this season, but will fall short of the win total, therefore I will side with the under.