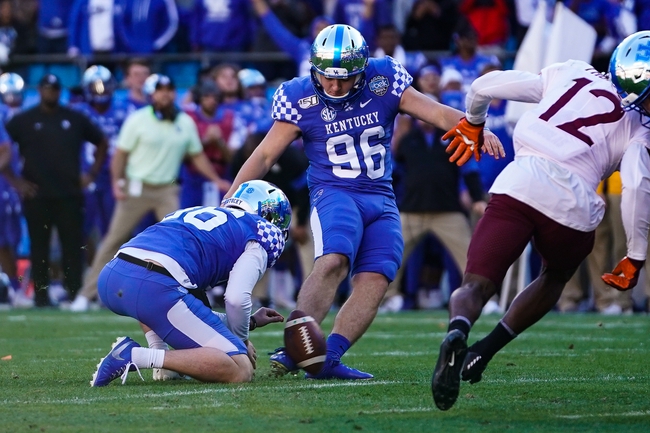 The Kentucky Wildcats will be looking to build off their 2019 season.  Kentucky finished the 2019 season with a record of (8-5), while going (3-5) in SEC play.  The offense averaged 27.2 points per contest, which ranked 76th at the FBS level.  The defense was rather stout, allowing an average of just 19.3 points per game, which had a ranking of 14th.  The program is under the direction of Mark Stoops.

The offense was a run first styled offense, as Kentucky did not have a quarterback pass for more than 690 yards.  Sawyer Smith saw playing time at the beginning of the season, passing for 690 yards, while throwing 4 touchdowns and 5 interceptions.  The offense was guided by  the do it all quarterback Lynn Bowden Jr.  Bowden passed for 403 yards, while throwing 3 touchdowns and 3 interceptions.  Bowden saw his most success as a rusher, totaling 1,468 yards and 13 touchdowns.  The quarterback also collected 30 receptions for nearly 350 yards. However, Bowden will not return for his senior season.  Running back Asim Rose rushed for 826 yards and 6 touchdowns, he returns for his senior season.  Josh Ali added 3 receiving touchdowns and 23 receptions.

As a team the defense collected 33 sacks and 8 interceptions, while forcing an incredible 15 fumbles. The defense was led by sophomore safety Yusuf Corker.  Corker totaled 74 tackles which was a team lead, while also adding 1 interception.  Calvin Taylor Jr led the team in sacks with 8.5, however he was a senior a season ago.  Linebacker Jamar Watson brings the best pass rushing skillset from a season ago, after registering 6.5 sacks. Brandin Echols contribute 9 pass break ups.

Let us take a look at the Kentucky schedule for the 2020 season.

The Wildcats open the season with a non-conference game against Eastern Michigan. The rest of the non-conference schedule features Kent State, Eastern Illinois, and a road contest at Louisville.  With the departure of Bowden, Kentucky will be needing other players to step up.  Quarterback Walker Wood looks to have a chance to compete for the starting quarterback spot.

Kentucky should be at least 3-1 in non-conference play.  Kentucky has a tough conference schedule, having to face Florida, Auburn, and Missouri on the road.  Missouri should be improved from a 6-6 season from a year ago.  The Wildcats also have to play Georgia at home.  With the projected win total set at 7 wins, this leaves for other games on the schedule.  Those games are home contests against South Carolina, Vanderbilt, Mississippi State, and a road game at Tennessee. Even if Kentucky were to win those 4 games, it would push the win total to 7, if the results shake out like I have above.

With Kentucky losing the majority of their offense from a season ago, plus needing to fill a quarterback spot with a player that won’t have a ton of experience, I’m going to side with the under.  I just can’t see Kentucky getting more than 7 wins.  However, the defense should be able to keep Kentucky in games again this season.