The Kentucky Wildcats and the Virginia Tech Hokies meet in the Belk Bowl in college football action from Bank of America Stadium on New Years Eve.

The Kentucky Wildcats come into this game representing the SEC after finishing the year with an overall record of 7-5, including a 3-5 mark in SEC play to finish in a tie for 4th in the SEC East division. Lynn Bowden Jr. led the Wildcats with 1,235 rushing yards and 11 touchdowns while Asim Rose had 757 rushing yards and Kavosley Smoke added 609 rushing yards. Bowden Jr. led Kentucky with 348 receiving yards while Ahmad Wagner added 254 receiving yards. Defensively, DeAndre Square led the Wildcats with 68 total tackles while Calvin Taylor Jr. led the Wildcats with 7.5 sacks and Jamar Watson had 6.5 sacks. As a team, Kentucky is averaging 391.8 yards of total offense and 26.3 points per game while allowing 324 yards of total defense and 18.4 points per game against this season.

The Virginia Tech Hokies come into this bowl game repping the ACC after finishing the year with an overall record of 8-4, including 5-3 in ACC conference play to finish in 2nd in the Coastal division. Hendon Hooker threw for 1,445 yards, 11 touchdowns and 2 interceptions on 62.1% in the regular season while Deshawn McClease led the Hokies with 717 rushing yards and 6 touchdowns. Tre Turner led the Hokies in receiving with 33 grabs for 542 yards while Damon Hazelton had 30 catches for 506 yards and 7 touchdowns. Defensively, Rayshard Ashby led the Hokies with 105 total tackles as well as logging 4.5 sacks while Chamarri Conner had a team-high 5.5 sacks and Caleb Farley had a team-high 4 interceptions this season. As a team, Virginia Tech is averaging 390.3 yards of total offense and 30.9 points per game while allowing 360.4 yards of total defense and 23.7 points per game against this season.

I get Virginia Tech being favored as the Hokies were the more consistent offense over the course of the year. However, Kentucky’s seemed to find new life under this new run-heavy offense, and I’m just not sure the Hokies will have an answer for it. On the other side, Kentucky really knows how to get after the QB and put pressure on and Hooker isn’t the kind of guy I want to rely on to get out of high-pressure situations like the ones Kentucky is going to bring. I’ll take a shot with Kentucky and the points in a game I think Kentucky wins outright.

Get Premium Picks Start Winning Now »
The pick in this article is the opinion of the writer, not a PickDawgz site consensus.
Previous Pick
Virginia vs. Florida - 12/30/19 College Football Orange Bowl Pick, Odds, and Prediction
Next Pick
Arizona State vs. Florida State - 12/31/19 College Football Sun Bowl Pick, Odds, and Prediction 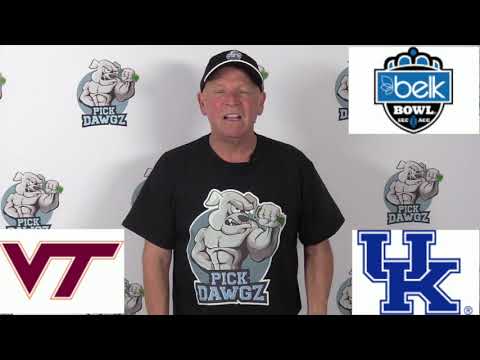