The BYU Cougars and the Hawaii Rainbow Warriors meet in the college football Hawaii Bowl from Aloha Stadium.

BYU comes in here at 7-5 overall. The Cougars had a five-game win streak going versus Boise State, Utah State, Liberty, Idaho State and UMass but lost their last game versus San Diego State.

In the loss to the Aztecs, BYU’s Zach Wilson threw for 316 yards and two INTs, and also led the rush on a tepid 29 yards. Talon Shumway was the top receiver there on 83 yards from six grabs.

Over on the Hawaii side, they’re 9-5 this year. The Warriors had a four-game win streak going versus San Jose State, UNLV, San Diego State and Army but lost their last outing to Boise State.

In the loss to the Broncos, Hawaii’s Cole McDonald put up 241 yards and an INT, and Miles Reed added 87 rush yards with a score. Jason-Mathew Sharsh had 74 yards receiving on seven catches there.

BYU was on a really nice run during their win streak, posting at least 28 points in each game (with 42 versus Idaho State and Utah State, and 56 against UMass) but hit the wall against the Aztecs and could only muster a field goal in the 13-3 defeat. It was certainly a reality check for the Cougars.

The Warriors had a nice run going in their streak as well, but really couldn’t do much of anything against the Broncos. It’s worth noting that Hawaii did beat SDSU 14-11, though.

In any case, this should be a really great matchup and a fun one to watch. If BYU can get some offensive momentum going I like the Cougars to bang out a cover here.

Get Premium Picks Start Winning Now »
The pick in this article is the opinion of the writer, not a PickDawgz site consensus.
Previous Pick
College Football Players Not Playing in Bowl Games
Next Pick
Miami-FL vs. LA Tech - 12/26/19 College Football Independence Bowl Pick, Odds, and Prediction 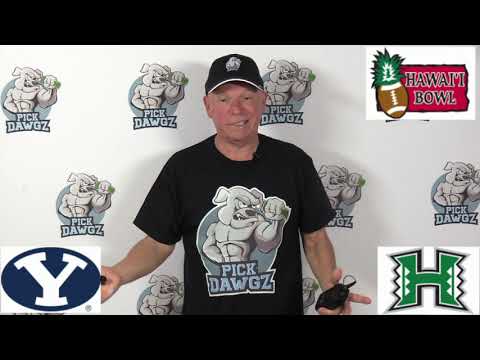