The San Diego State Aztecs and the Central Michigan Chippewas meet in the New Mexico Bowl in college football action from Dreamstyle Stadium.

The San Diego State Aztecs come into this one representing the Mountain West conference after finishing the regular season with a 9-3 overall record, including 5-3 in conference playing, finishing tied for the top spot in the West division but losing out on a spot in the conference championship game after a head-to-head tiebreaker with Hawaii. Ryan Agnew threw for 2,175 yards, 11 touchdowns and 5 interceptions on 63.5% passing while Juwan Washington led the Aztecs in rushing with 500 rushing yards and 2 TDs. Chance Bell and Chase Jasmin each had 300+ rushing yards for SDSU on the year. Kobe Smith led the Aztecs with 57 catches for 673 yards and 4 touchdowns while Jesse Matthews had 45 grabs for 522 yards. Defensively, Kyahva Tezino led the Aztecs with 96 total tackles while Luq Barcoo had 8 interceptions and Myles Cheatum had 5 sacks. As a team, San Diego State averaged 330.1 yards of total offense and 19 points per game while allowing 288.7 yards of total defense and 12.8 points per game against, the 4th-lowest scoring defense in the country this season.

The Central Michigan Chippewas come into the New Mexico Bowl representing the MAC after finishing the year with an 8-5 overall record, including a 6-2 mark in MAC conference play to finish atop the MAC West division, earning a spot in the conference championship where the Chippewas lost to Miami-Ohio by a final score of 26-21. Quinten Dormady threw for 2,148 yards, 14 touchdowns and 6 interceptions on 66.8% passing while David Moore threw for 1,143 yards, 5 TDs and 4 picks on 57.3% passing. Jonathan Ward led Central Michigan in rushing with 1,082 yards and 15 touchdowns while Kobe Lewis had 977 rushing yards and 11 TDs. Kalil Pimpleton led CMU’s receiving group with 79 grabs for 823 yards and 6 touchdowns while JaCorey Sullivan had 776 yards and Tyrone Scott added 609 receiving yards. Defensively, Troy Brown led the Chippewas with 84 total tackles including a team-high 71 solo tackles and 3 interceptions while Sean Adesanya led the Chips with 7 sacks. As a team, Central Michigan is averaging 447.4 yards of total offense and 31.9 points per game while allowing 351.8 yards of total defense and 26.8 points per game against this season.

I’d like to think that Central Michigan will put up a fight here, but one of my favorite plays in bowl season is betting against the MAC. You see a MAC team in a bowl game and go the other way, it pays off more often than not. Since 2015, in bowl games, the MAC is 5-19 in 24 games. Granted, San Diego State was shut out by Ohio last year, but the Aztecs are one of the best defensive teams in the country and I just don’t see the Chippewas being able to move the ball on San Diego State enough to make a game of this. I’ll lay the points with San Diego State here.

Get Premium Picks Start Winning Now »
The pick in this article is the opinion of the writer, not a PickDawgz site consensus.
Previous Pick
Alcorn State vs. North Carolina A&T - 12/21/19 College Football Pick, Odds, and Prediction
Next Pick
Georgia Southern vs. Liberty - 12/21/19 College Football Cure Bowl Pick, Odds, and Prediction 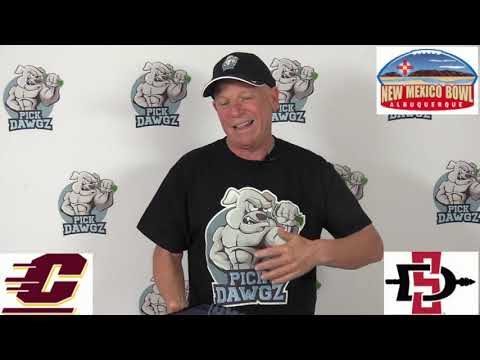