The Arkansas State Red Wolves and the FIU Panthers meet in the Camellia Bowl in college football action from the Cramton Bowl on Saturday.

The Arkansas State Red Wolves come into this game representing the Sun Belt conference, finishing with an overall record of 7-5, including a 5-3 mark in Sun Belt conference play, finishing in 2nd place in the West division. Layne Hatcher threw for 2,553 yards, 23 touchdowns and 9 interceptions on 68.3% passing while Marcel Murray has rushed for 782 yards and 6 touchdowns. Omar Bayless leads A-State in receiving with 84 catches for 1,473 yards and 16 touchdowns while Jonathan Adams Jr. has 58 catches for 788 yards and Kirk Merritt had 64 grabs for 763 yards and 11 TDs. Defensively, Darreon Jackson led the Red Wolves with 103 total tackles while William Bradley-King added a team-high 8.5 sacks. As a team, Arkansas State is averaging 432.2 yards of total offense and 33.7 points per game while allowing 481.9 yards of total defense and 34.8 points per game against this season. 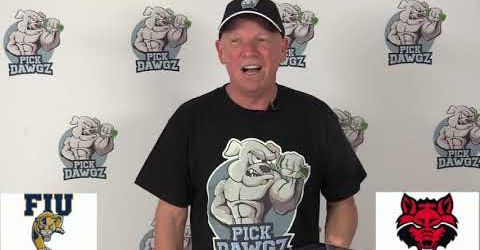 The FIU Panthers come into this game with a 6-6 overall record, representing C-USA after finishing the year with a 3-5 mark in conference play to finish tied for 5th. James Morgan threw for 2,248 yards, 13 touchdowns and 3 interceptions on 58% passing while Anthony Jones led FIU in rushing with 802 rushing yards and 9 TDs and Napoleon Maxwell had 609 rushing yards and 8 scores. Tony Gaiter IV led the Panthers with 49 catches for 607 yards and 4 touchdowns while Shemar Thornton added 48 catches for 582 yards and 5 TDs. Defensively, Jamal Gates leads FIU with 83 total tackles while Sage Lewis has 80 total tackles with 3 interceptions. Rishard Dames had 3 interceptions as well while Alexy Jean-Baptiste leads FIU with 4.5 sacks. As a team, FIU is averaging 371.3 yards of total offense and 26.5 points per game while allowing 383.6 yards of total defense and 26.7 points per game against this season.

Neutral site games can be tricky, but the issue I have with FIU is that the Panthers weren’t very good away from home this season, going 0-5 SU on the road and only covering once in those five games. Arkansas State isn’t a world beater by any means, but the Red Wolves have the better offense and should be able to do enough to win this one by at least a touchdown so I’ll lay the points with Arkansas State in this one.