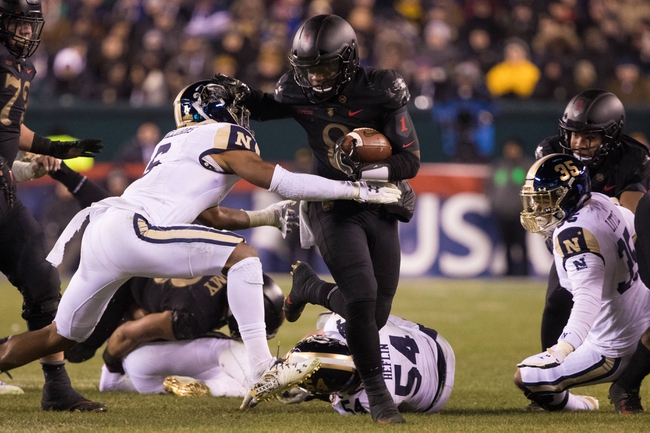 The Army Black Knights and the Navy Midshipmen meet in college football action from Lincoln Financial Field on Saturday.

Army comes in here at 5-7 overall. The Black Knights took out UMass 63-7 and VMI 47-6 for consecutive wins last month but lost their most recent outing 52-31 to Hawaii.

In the loss to the Warriors, Army’s Jemel Jones threw for 43 yards and an INT on three completions. Christian Anderson led the rush with 114 yards, and Sandon McCoy added 91 rush yards with two TDs.

Over on the Navy side, they’re 9-2 so far. The Midshipmen fell to Notre Dame about a month back, but since then they’ve been able to dispatch SMU and Houston in their last two appearances.

In the win over the Cougars, Navy’s Malcolm Perry threw for 107 yards on two completions. Jamale Carothers (188 rush yards; five TDs) and Perry (146 rush yards; TD) did most of the work on the ground in the 56-41 victory.

Army was within striking distance of the Warriors at halftime 24-17, but Hawaii’s 14-0 fourth-quarter edge eventually sealed the Knights’ fate in a somewhat disappointing effort. Army had been on a pretty good roll over their previous two games and a lot of people (myself included) thought they’d get in there a little closer.

In any case, all the pressure is on Navy to assert themselves here, especially after the big loss to Notre Dame and a couple of relative close calls since then. The Midshipmen shouldn’t have a ton of issues winning this game, but on a double-digit spread I like the Knights to eke out a cover.