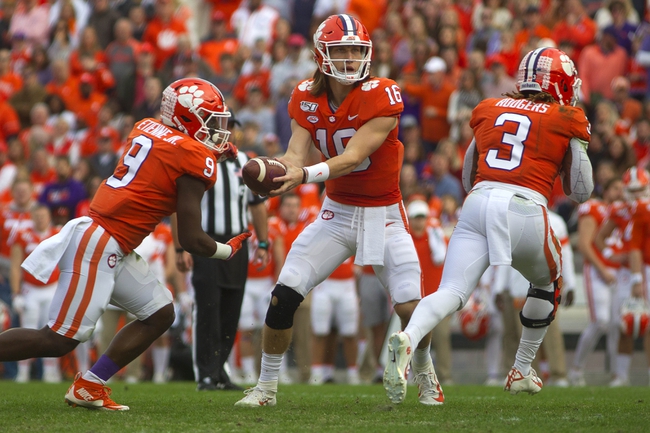 Where to Watch: ABC, ESPN3 Stream live sports and exclusive originals on ESPN+. Sign up now!

The Virginia Cavaliers and the Clemson Tigers meet in the ACC championship game in college football action from Bank of America Stadium on Saturday night.

The Virginia Cavaliers come into this one with an overall record of 9-3, including a 6-2 mark in ACC conference play to book their ticket to the title game, representing the ACC Coastal division, highlighted by a win over Virginia Tech in their regular season finale to lock up their spot by snapping a 15-game losing streak against the Hokies. Bryce Perkins threw for 2,949 yards, 16 touchdowns and 9 interceptions on 64.2% passing while also leading Virginia in rushing with 687 rushing yards and 11 touchdowns. Wayne Taulapapa added 416 rushing yards and 12 touchdowns while Hasise Dubois led the Cavs in receiving with 849 receiving yards this season. Terrell Jana had 61 catches for 698 yards while Joe Reed added a team-high 70 catches for 627 yards and 6 touchdowns. Defensively, Zane Zandler led the Cavs with 85 total tackles while Joey Blount had 79 total tackles including a team-high 48 solo tackles as well as a team-high 3 interceptions. Jordan Mack led Virginia with 7.5 sacks while Noah Taylor was right behind with 6.5 sacks this season. As a team, Virginia is averaging 33.7 points and 390.3 yards of total offense while allowing 23.5 points and 338.3 yards of total defense per game this season.

The Clemson Tigers come into this game with a perfect 12-0 record, looking for their 5th straight conference championship game victory. The Tigers finished the year with an 8-0 mark in conference play where they won their last 7 games by at least 31 points. Trevor Lawrence has thrown for 2,870 yards, 30 touchdowns and 8 interceptions on 68.6% passing while Travis Etienne led the Tigers in rushing with 1,386 rushing yards and 16 touchdowns and Lyn-J Dixon had 672 rushing yards and 5 TDs. Tee Higgins led Clemson in receiving with 43 catches for 900 yards and 10 touchdowns while Justyn Ross added 52 grabs for 648 yards and 7 touchdowns. Amari Rodgers and Diondre Overton were also 300+ yard receivers for Clemson this season. Defensively, Isaiah Simmons led the Tigers with 84 total tackles including a team-high 53 solo tackles and 6 sacks while Tanner Muse had a team-high 4 interceptions this season. As a team, Clemson is averaging 45.2 points and 541.8 yards of total offense while allowing the fewest points per game in the country, giving up 10.1 points and 232.8 yards of total defense this season.

I think all we can hope for is a competitive conference championship game and Virginia is capable of providing that after an impressive season and are trying to secure 10 wins for the first time in 30 years and just the second time in program history. However, Clemson has steamrolled their opposition for most of the year, tying for the longest streak since 1936 with seven straight wins of 30+ points and not only has the offense been performing, the defense has been stout as well. I just think that Clemson is playing too well to slip up against Virginia here and the Tigers are a team on a mission looking to defend their national championship here. It’s a lot of points, but I see no reason that Clemson doesn’t roll here either.