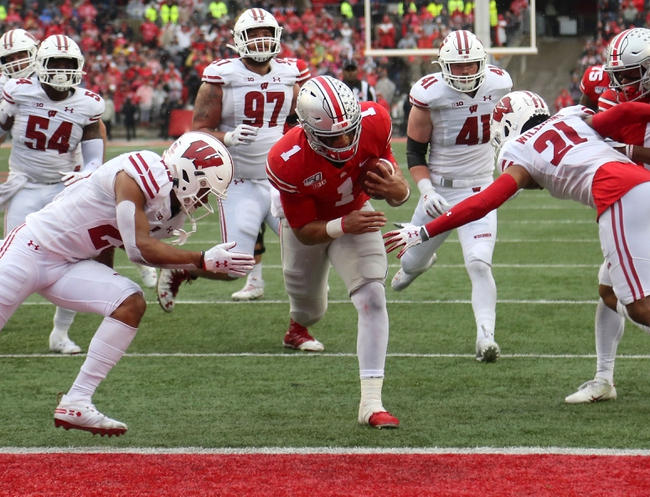 The Wisconsin Badgers enter the Big Ten championship game for the 6th time after finishing the regular season with an overall record of 10-2, including a 7-2 mark in Big Ten conference play to tie for the top spot in the West division with the Minnesota Golden Gophers, beating out Minnesota on a head-to-head tiebreaker in the final week of the season with a 38-17 road victory at Minnesota. The Badgers’ two losses came in back-to-back weeks with a shock 24-23 loss at Illinois followed by a 38-7 thrashing at the hands of these very same Buckeyes. Jack Coan threw for 2,309 yards, 17 touchdowns and 4 interceptions on 72.3% passing while Jonathan Taylor led the Badgers in rushing with 1,761 yards and 20 rushing Tds this season. Quintez Cephus led the Badgers with 45 catches for 720 yards and 6 touchdowns while Jake Ferguson added 330 receiving yards and 4 other Badgers each had 200+ receiving yards this season. Defensively, Chris Orr had 71 total tackles as well as shared the team-high with 11.5 sacks while Zack Baun added 11.5 sacks of his own and Eric Burrell had 3 interceptions this season. As a team, Wisconsin is averaging 35.8 points and 443.2 yards of total offense while 14.6 points and 278.8 yards of total defense this season.

The Ohio State Buckeyes will look to win their third straight conference championship game, entering this one with a perfect record of 12-0, with 11 of their wins coming by at least 24 points. Justin Fields threw for 2,654 yards, 37 touchdowns and an interception on 68.2% passing while also rushing for 470 rushing yards and 10 touchdowns. J.K Dobbins added 1,657 yards and 19 touchdowns on the ground while Master Teague III added 780 rushing yards and 4 scores. Chris Olave led the Buckeyes with 705 receiving yards and 11 touchdowns while K.J. Hill had 486 yards and 8 touchdowns with a team-high 44 catches and Binjimen Victor added 480 receiving yards. Malik Harrison led the Buckeyes with 63 total tackles and a team-high 40 solo tackles while Chase Young leads the Buckeyes and is tops in the country with 16.5 sacks on the year. As a team, Ohio State is averaging the highest-scoring offense in the country with 49.9 points per game on 534.8 yards of total offense while allowing 11.8 points per game against and 232.6 yards of total defense this season.

I’d like to give Wisconsin a chance to be competitive here like the 2017 meeting between these two that finished 27-21, but the issue is that Ohio State already steamrolled Wisconsin 38-7 earlier this year, and I think Ohio State is as good if not better than what they were in that game. The Buckeyes have pretty much flattened any team that’s stood in their way so far and I just don’t see Wisconsin keeping up with Ohio State here. I’ll lay the points with the Buckeyes in this one.