The Memphis Tigers have won each of their last six games and hope to win their sixth conference title in school history. The Memphis Tigers haven’t lost a home game since October 13 of last year. Brady White is completing 67.1 percent of his passes for 3,074 yards, 30 touchdowns and seven interceptions. White has two or more touchdown passes in his last 10 games. Damonte Coxie and Antonio Gibson have combined for 1,430 receiving yards and 15 touchdowns while Kenneth Gainwell has 38 receptions. The Memphis Tigers ground game is averaging 196.1 yards per contest, and Kenneth Gainwell leads the way with 1,294 yards and 12 touchdowns. Defensively, Memphis is allowing 24.5 points and 361.7 yards per game. Austin Hall leads the Memphis Tigers with 56 tackles, Bryce Huff has four sacks and Quindell Johnson has two interceptions.

The Cincinnati Bearcats are 4-4 ATS in their last eight games as a double-digit underdog. The Memphis Tigers are 7-3 ATS in their last 10 games as a double-digit favorite. We had the Cincinnati Bearcats and the points last week, a game they could have won outright if it wasn't for the three turnovers. Every other stat says these teams were even and it was Cincinnati that also had the edge in time of possession. Again, I know how explosive the Memphis Tigers are at home, but Cincinnati is a good football team and has to be confident after what it was able to do last week. Also, you can probably expect an even tighter game given that these clubs just played last week in the sam venue and threw a lot of their game plan out already. Give me the points. 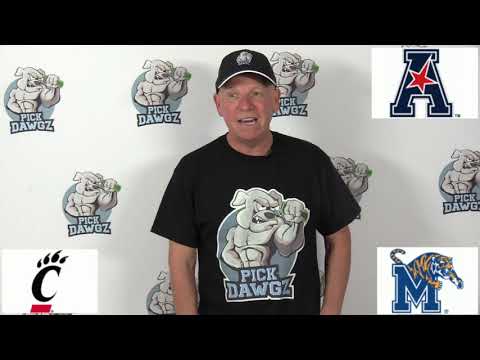